Has a seawater-based vascular system instead of blood

Click through all of our Starfish images in the gallery. 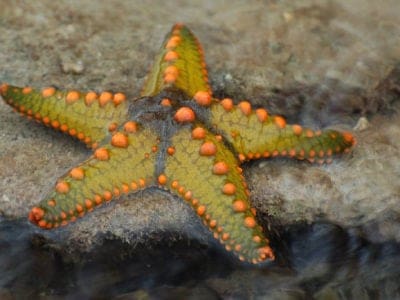 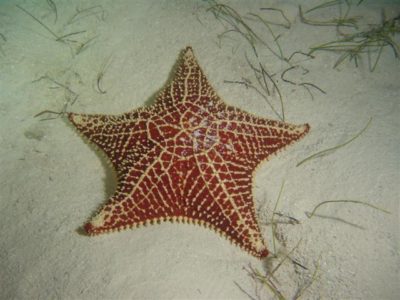 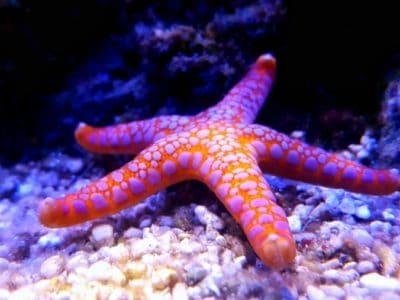 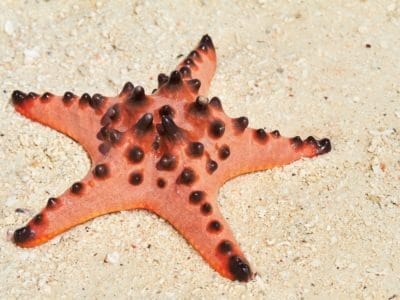 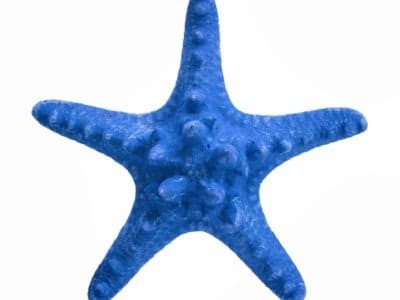 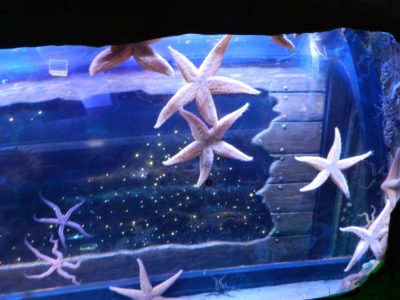 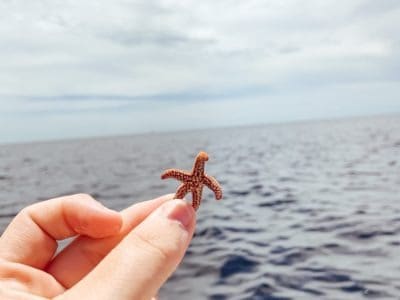 View all of the Starfish images!

Starfish, also known as sea stars, are some of the most important members of the underwater kingdom.

Although they aren’t technically fish, sea stars are animals that are still present in nearly every coastal habitat and can be found as low as the abyssal layer. You can identify a starfish by its bumpy skin and flat center surrounded by long limbs that give the appearance of a star. These slow-moving but sensitive fish come in a wide array of colors; although you should never pick one up, trying to find starfish along the beach is a wonderful seaside activity.

The aquatic animal that is commonly known as a starfish is also frequently called a sea star. All of these animals fall into the class Asteroidea; in the scientific community, they are frequently known as asteroids. The zoological name Asteroidea translates to “star-shaped – “aster” means “star,” and “eidos” refers to “shape.”

Asteroidea is one of the largest classes in the Echinodermata family. Other echinoderms include sea urchins, sea cucumbers, and sand dollars. Most echinoderms have the same five-pointed structure as common sea stars, but plenty of these animals – including some of the different types of starfish – are capable of having far more complicated structures.

There are over 2,000 distinct species of starfish, and more are frequently discovered during oceanic research. The many types of these animals are as varied as the different places where they are found. With so many bright colors and creative forms, it’s no surprise that so many sea stars have colloquial and zoological names that express their unique types of beauty. Some of the most notable types include:

Starfish are flat aquatic animals that move slowly and stick to the ocean floor. Most of them have a central disk surrounded by five or more arms. The mouth is usually located in the middle of the disk, and the ends of their arms feature light-sensitive eyespots. The skin is covered in small spines, and the bottom of its limbs are usually lined with hundreds of small tubular feet that are used for gradual movement.

Starfish are animals that come in an amazing array of colors and variations. From bold purple stripes to pointed black horns, there’s no limit to the different types you might find. There are small species that are only an inch or two across, and there are large starfish that can get as big as a foot. Every region is different; you may need to take a walk along the beach to see your local sea stars.

These animals are found along every coast in the world. Because they use seawater as part of their vascular system, they cannot live in any type of freshwater. You can find them in coral reefs, muddy bays, underwater kelp forests, and pretty much every other kind of aquatic environment.

Although there are starfish all over the world, this species is still considered to be near threatened. Human presence has destroyed many of the coral reefs that house the world’s different starfish species. These animals are incredibly important to their local ecosystems, and the recent decline of their species has threatened the biodiversity of many different regions.

These animals are carnivores that consume nearly all types of small ocean life. Depending on where they live, they may eat mussels, oysters, clams, sea snails, fish, and even other starfish.

These animals are also seen as prey by many different types of ocean-faring life. Mammals like seals and otters may choose to eat them as a snack; other threats include birds, crabs, and large carnivorous fish.

These animals are solitary creatures, but they come together in large groups for mating purposes on a semi-yearly basis. They typically mate by pairing off with an opposite-gender partner. Both sea stars will release a spawn cloud into the water; once the eggs are fertilized, they will drift to the ocean floor.

These animals do not appear to care for their young after the eggs are laid. The embryos hatch before they are fully developed; as the young grow, it will slowly gain limbs and assume their adult form. These animals can live to be up to 40 years old and will continue to develop and regrow their limbs as they age.

Starfish in Fishing and Cooking

These animals are not eaten as a staple food anywhere in the world. Some exotic restaurants sell fried starfish; however, between the fact that they are naturally toxic and the various state- and federal-level regulations on the sale of this sea animal, these restaurants are seldom profitable enough to continue providing them as a product.

Where are starfish found?

Starfish are found at the borders of all of the world’s oceans. Although they are most commonly found in coral reefs, you can also find sea stars hidden among other forms of aquatic vegetation, including seagrass meadows and kelp forests.

What is the scientific name of a starfish?

The scientific name for starfish is Asteroidea. There are nearly 2,000 different species of starfish, all with their own unique names.

What do starfish eat?

Starfish are carnivores that eat other forms of aquatic life that are smaller than their mouths. The diet of every starfish varies based on the species and location; however, most starfish eat things like mollusks, small fish, and seaweed.

Can you eat starfish?

Most types of starfish are inedible. Even the ones that aren’t toxic contain foul-tasting flavinoids known as saponin; if you put a piece of starfish in your mouth, it will immediately taste foul and bitter.

How long do starfish live?

Starfish is an incredibly long-lived form of aquatic life; it’s not unusual for a sea star to live as long as 40 years in the wild.

How do starfish reproduce?

Starfish reproduce by releasing spawn clouds. The male and the female starfish typically release their clouds at the same time, thus allowing the eggs to be fertilized.

Starfish pose no danger to humans, but humans pose plenty of danger to starfish. If you see a sea star in the wild, don’t touch it; these delicate creatures are sensitive, brittle, and fragile.

Starfish do not technically meet the scientific qualifications for “fish;” they lack gills, fins, scales, or any of the other identifying creatures. However, starfish still live underwater and are a normal part of the aquatic ecosystem.

Do brittle stars count as starfish?

Brittle stars, which are also known as basket stars, are not actually a type of starfish. The basket star is another kind of echinoderm that is capable of moving itself along the seafloor by using its flexible arms. The zoological name of the basket star is Ophiuroidea.

What Kingdom do Starfish belong to?

Starfish belong to the Kingdom Animalia.

What class do Starfish belong to?

Starfish belong to the class Asteroidea.

What phylum to Starfish belong to?

Starfish belong to the phylum Echinodermata.

What type of covering do Starfish have?

Starfish are covered in Spines.

What are some predators of Starfish?

Predators of Starfish include fish, birds, turtles, and otters.

How many babies do Starfish have?

What is an interesting fact about Starfish?

Starfish have 2 stomachs to aid digestion!

How many species of Starfish are there?

What is the biggest threat to the Starfish?

The biggest threat to the Starfish is coral reef destruction.

What is another name for the Starfish?

The Starfish is also called the sea star.

How many Starfish are left in the world?

The population size of the Starfish is unknown.

How fast is a Starfish?

A Starfish can travel at speeds of up to 0.6 miles per hour.