The most widespread owl in Europe!

Click through all of our Tawny Owl images in the gallery. 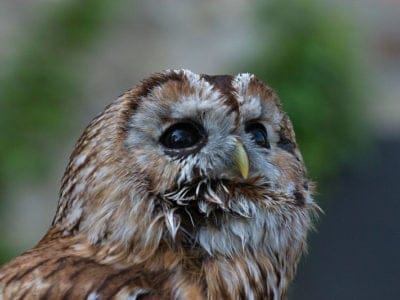 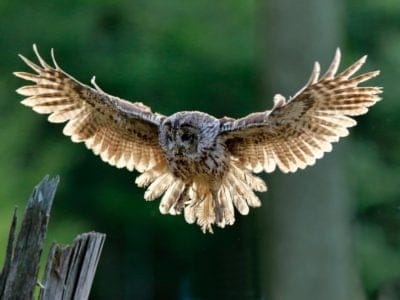 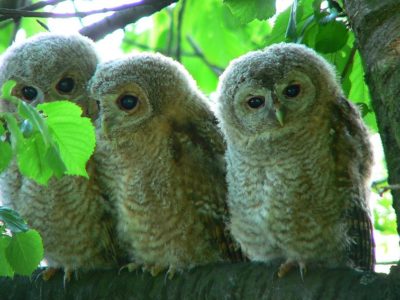 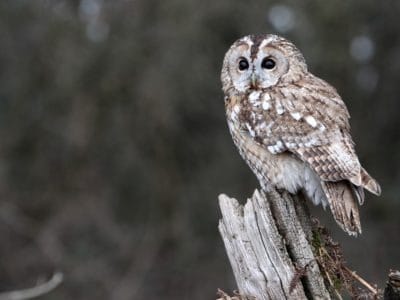 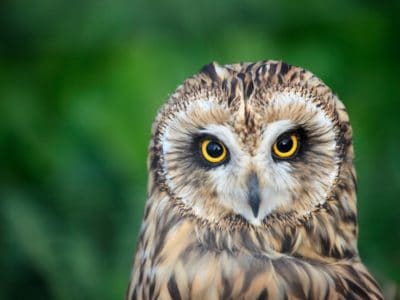 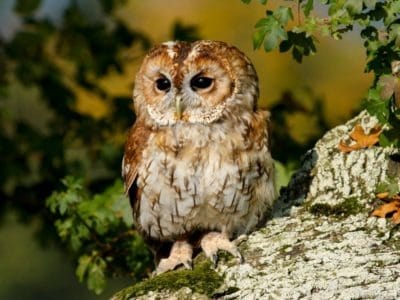 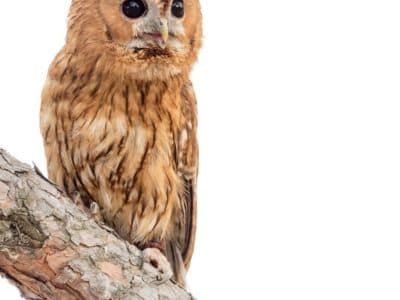 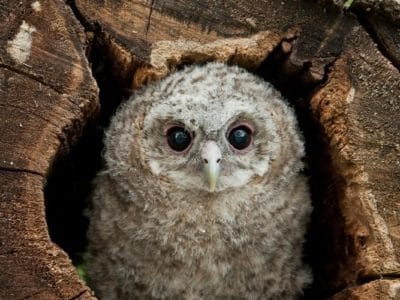 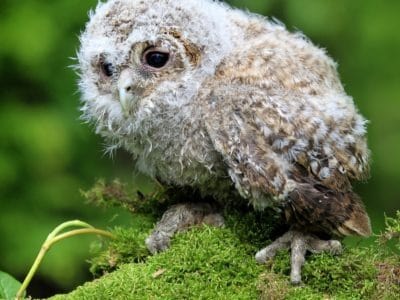 View all of the Tawny Owl images!

“Tawnies are by far the most common owl species in the UK, with an estimated population of 50,000 pairs.”

A species of wood owl, tawny owls are highly territorial and about the size of a wood-pigeon. These medium-sized owls live across Europe and in some parts of Asia, but you will mainly find them in wooded places in Europe. In fact, these owls are one of the most common owls that live in Europe and are the most widespread bird of prey in the United Kingdom.

The scientific name of the tawny owl is Strix aluco. Strix is a Greek derivative meaning “owl.” Aluco, however, comes from the Italian words allocco. Allocco means tawny owl from the Latin ulucus (“screech-owl”). They are also referred to as brown owls.

Tawny owls are considered robust owls, measuring up to 43cm tall and having wingspans as long as 100cm. They are stockier than other similar species of owl, including an eagle and Ural owls. On average, these owls weigh around 1lb. You can recognize it from its rounded heady and body and the ring of darker feathers around its eyes. They are seen in the wild in brown, grey, or reddish-brown colors. All colors of tawny owl have paler underparts with dark streaks.

These owls are nocturnal birds of prey. Typically, this means that they can be found asleep in their tree hole nests during the daylight hours. During the early spring breeding season, however, males might be seen hunting during the day to collect food for their mate.

These agile owls are extremely vocal during autumn, winter, and early spring. During the night, they can often be heard making hooting and screeching noises. These various calls allow them to mark their territory, communicate with other owls, and to help attract a mate. When defending their nests, they can be very aggressive. They cause more injuries to humans than any other bird in Europe. Tawny owls do not live with others unless they have a mate or owlets.

Tawny owls are considered resident birds across their large geographical range of 3.8 million square miles. The world’s wild population of these owls extends from the United Kingdom eastward into western Siberia. Therefore, although these owls are confused with tawny frogmouths, they do not even live on the same continent as the Australian bird. This means they do not migrate outside of their territories. When fledglings leave their parent’s nest, they do not travel very far to find their own independent territory.

These owls make their homes in dense forest and woodland. These covered landscapes allow them to rest undisturbed during the day. They are mainly found in deciduous and mixed forests and like to be near water. Green spaces, like cemeteries and parks, in urban areas, have allowed their habitat to expand into places like central London. They also prefer lowlands, especially in colder climates.

They are well-adapted to wooded areas, thanks to superior vision and hearing. Because they are nocturnal, the evolution of tawny owls has given them front-facing eyes for better binocular vision. Their vision is 100 times better than that of humans. Evolution has also given them uniquely-shaped ear openings to improve directional hearing.

Because tawny owls are nocturnal, they can use the advantage of incredible hearing and night vision to catch their prey swiftly. Their flight is almost completely without sound, which makes it easy for them to glide down to their victims. These owls prey on small rodents such as voles and mice, and also beetles, frogs, and fish. In the same way as other species of owl, they swallow their prey whole. After a few hours, they will regurgitate anything that is undigestible. These undigestible parts take the form of medium-sized, grey pellets consisting of fur and tiny bones.

Tawny owls are also a predator towards other, less-aggressive woodland owls. Little owls and long-eared owls find it hard to coexist with them for this reason.

Tawny owls are relatively small birds compared to other birds of prey. Their smaller size makes them a more obvious target for several natural predators within its environment. Predators of these owls include larger birds of prey such as hawks, eagles, buzzards, and even larger species of owl. Eagle owls and northern goshawks are the birds of prey of most concern. Other animals might be a threat to them, in particular their eggs and chicks, including dogs, cats, and foxes. Pine martens have also been known to raid their nests for eggs.

Around the age of one, these owls begin to pair off. They are known to mate for life, but this is not universal. In fact, some males have been recorded as polygamous. Most tawny owls establish nests in tree holes, but may also readily use old European Magpie nest, holes in buildings, and manmade nest boxes.

Anywhere from 3 to 6 eggs all be laid by a female owl in the late spring to early summer breeding season. A female will spend about one month incubating her eggs while her mate brings her food. A mated pair will raise their chicks until they are around just 2 months old. Evidence shows, however, that these owls might look after their chicks for as long as 3 months of age.

Wild tawny owls generally live between 4 and 6 years, depending on different factors. The oldest recorded owl was a captive bird that lived in the UK for 27 years. In the wild, the oldest known tawny owl lived 18 years. Besides becoming victims of stronger birds of prey, there are few things that shorten their lifespan. Young owls recently removed from their parent’s nest often starve while trying to establish a territory of their own. This is very common with young owls that refuse to move out of the parental territory. Otherwise, they die in accidents related to vehicles, trains, and wires.

Worldwide, the population of these owls extends from the United Kingdom throughout Europe and eastwards to Iran. There are tawny owls as far as western Siberia and into parts of Tajikistan, Pakistan, and Kyrgyzstan. In the United Kingdom, they are absent from islands, as well as Ireland. There is a bit of lore or myth that these owls do not like to make short trips over the sea, which could explain this distribution.

Just in the continent of Europe, there are an estimated 970,000 to 2,000,000 of these owls. Their population has not been regularly recorded over the years, but evidence points to an overall increase.

What is a tawny owl?

A tawny owl is a species of wood owl that is very common in the UK and throughout the continent of Europe. Tawny owls are known for their very distinct call that was once immortalized by a line in a Shakespeare play.

How big is a tawny owl?

Tawny owls are considered medium in size. They also have a chunky body shape with no ear-tufts.

No. Tawny owls are the most common type of owl in the United Kingdom and are widespread throughout Europe. Their populations also extend into western Siberia and down into Pakistan and Tajikistan.

Tawny owls are carnivores like most other birds of prey. Their diet mainly consists of small mammals.

What do tawny owls eat?

Tawny owls primarily eat small mammals, including wood mice and voles. They will also prey on fish, frogs, rabbits, small birds, and even other species of owl. Other woodland owls, like the little owl and the long-eared owl, are at risk of becoming the prey of tawny owls.

Where do tawny owls live?

Tawny owls are a species of wood owl and live in woodland areas. They typically do not have territories in areas with few trees, because they prefer the cover and protection of tree branches.

For those who trespass into their territories, especially near their nests or young, the tawny owl can be extremely dangerous. Female tawny owls are particularly aggressive. There have been reports of tawny owls attacking people’s faces and damaging eyes with their sharp talons.

How long do tawny owls live?

Tawny owls have a shorter lifespan than some larger species of owls. In the wild, they live 4 to 6 years on average. However, a tawny owl in the wild was recorded to live until the age of 18.

What Kingdom do Tawny Owls belong to?

What class do Tawny Owls belong to?

What phylum to Tawny Owls belong to?

What family do Tawny Owls belong to?

What order do Tawny Owls belong to?

What type of covering do Tawny Owls have?

Tawny Owls are covered in Feathers.

What genus do Tawny Owls belong to?

What are some predators of Tawny Owls?

Predators of Tawny Owls include hawks, eagles, and buzzards.

What are some distinguishing features of Tawny Owls?

How many eggs do Tawny Owls lay?

What is an interesting fact about Tawny Owls?

Tawny Owls are the most widespread owl in Europe!

What is the scientific name for the Tawny Owl?

The scientific name for the Tawny Owl is Strix aluco.

How fast is a Tawny Owl?

A Tawny Owl can travel at speeds of up to 50 miles per hour.

How do Tawny Owls have babies?