Tsetse flies are large biting flies that live in the tropical regions of Africa.

Click through all of our Tsetse Fly images in the gallery. 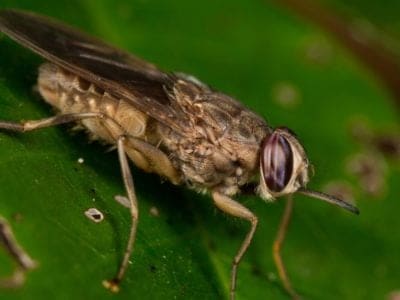 View all of the Tsetse Fly images!

Tsetse flies are a type of blood-sucking insect that lives in diverse locations in Sub-Sahara Africa.

There are about 27 different species of tsetse flies, which have been given the scientific name of Glossina. The pronunciation of tsetse is tse-see, according to Merriam Webster. This insect’s deadly bite, which you may not even notice, kills thousands each year.

Biologists divide the glossina genus into three subgroups based on their behavior, how their molecules are arranged and their morphological structure: It is often easier to think about them being divided into groups by their preferred location because different types live in different habitats.

Appearance: How to Identify Tsetse Flies

Tsetse flies are between 0.25-and-0.5-inches big or about the size of a housefly. Depending on the species, they are yellowish-brown to dark brown. All tsetse flies have a gray area on their thorax. You may see faint bands on their abdomens.

The head of a tik-tik fly has large eyes on each side of its head. The thorax is made up of three fused segments and is large for the size of the fly. The abdomen is short and wide. It gets noticeably wider when the fly eats.

Tsetse flies can look different depending on the phase of the life cycle that they are in currently. The life cycle begins with the egg hatching. Then, about four days later, the male has sex with the female. While the act only happens once, the female remains pregnant for the rest of her life. An egg is passed into a special sack on her body every nine days, where she feeds it a unique substance. In a couple of days, she lays the egg, and the life cycle begins again. Females will continue to lay eggs throughout their life cycle, which lasts for about 4 months.

Entomologists look for at least four characteristics when deciding if an insect they are examining is a member of the glossina genre.

It is the bite of the tsetse fly that makes them so dangerous to humans. Researchers at the University of Bristol have discovered that the fly uses its teeth to tear through the skin and capillaries. Then, it uses its rasps to make the hole bigger. Researchers were surprised to learn that the tsetse fly projects a substance from its proboscis, a long tube in the insect’s mouth, that keeps its victim’s blood from clotting. Researchers have not found this proboscis tube in any other insect.

Habitat: Where to Find Tsetse Flies

These insects live in sub-Sahara Africa. Depending on the species, they can be found in several habitats. Most prefer to live in wooded areas. They will stay in the woods’ underbrush, where they often hide under logs or rocks. Tik-tik flies prefer to live close to their food source as they spend most of their time resting.

Diet: What Do Tsetse Flies Eat?

These insects feed on blood. Each species has a food source that it prefers. Only one species is a generalist that feeds on any blood available, but others may feed off other sources if their preferred source is unavailable. Many species prefer to dine on animals, like cattle, and not on humans.

While it was thought that tsetse flies only fed on blood for a long time, researchers know that is not always the case. If the fly gets hungry enough and no blood is available, it may feed on water or water with sugar. This finding may be important in helping to control the tsetse fly.

Prevention: How to Get Rid of Tsetse Flies

Researchers continue to study how to get rid of tsetse flies because they are so dangerous. Some sprays can effectively control tsetse flies, but they can be costly and difficult to obtain in the needed areas.

These insects can also be trapped. They want a place to rest under a large object, and they want a source of blood. Therefore, researchers have discovered that they can trap them by providing these two things. They have also found that they are drawn to the color blue. Since these flies can see approximately 165 feet, it can be challenging to provide enough traps to cover the whole area where tsetse flies live.

Screens can also kill these insects, but they only work when the screen is covered with a repellent. The most effective screens are placed near where tsetse flies live. They are made of blue material with a black strip down the middle covered with repellent. The blue color attracts the tsetse. Then, they try to land on the black strip to rest, and they die. Keep in mind that incomes in the area where tsetse flies live can be meager, so repellent can be very expensive.

What is a Tsetse Fly?

The tsetse fly, also called the tik-tik fly, is a blood-sucking fly that kills up to 275,000 annually in Sub-Sahara Africa. The fly is about 0.5-inches big and carries many diseases, including sleeping sickness.

What Happens if You Get Bitten by a Tsetse Fly?

The West African sleeping sickness is most prevalent in the Democratic Republic of Congo, Angola, Sudan, Central African Republic, Republic of Congo, Chad, and northern Uganda. The disease, which takes several months to progress, enters the central nervous system, where it can be life-threatening if left untreated. The condition can be transmitted from mother to fetus through the bloodstream.

Can a Tsetse Fly Kill You?

Yes, the tsetse fly can kill you because it can cause the Trypanosoma brucei gambiense parasite to enter your bloodstream, causing sleeping sickness. This disease can be hard to diagnose because the confusion that it causes often is not apparent for several months. When it is not treated, then the parasite eventually attacks the central nervous system causing death.

Why are Tsetse Flies Dangerous?

Tsetse flies are dangerous because they can cause sleeping sickness.

Are Tsetse Flies in America?

No, the tsetse fly is not currently found in America. Fossils of tsetse flies have been found in numerous West Coast locations, especially Colorado, so researchers know that the fly once lived in this country.