Click through all of our Virgin Islands Dwarf Gecko images in the gallery. 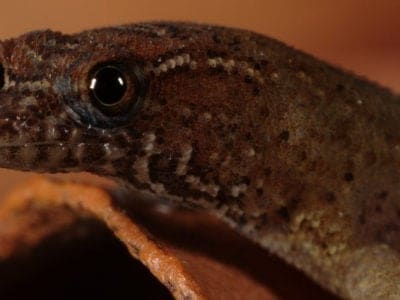 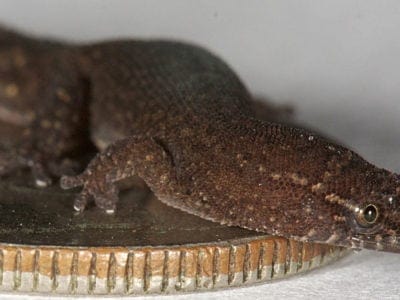 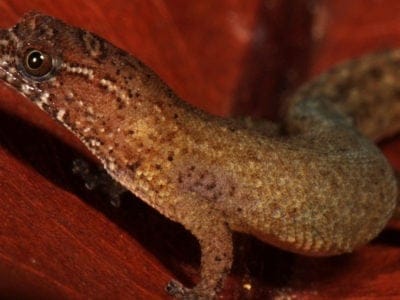 View all of the Virgin Islands Dwarf Gecko images!

The Virgin Islands dwarf gecko is one of the smallest reptiles in the world.

First discovered in 1964, this unique lizard is thought to inhabit several islands of the British Virgin Islands archipelago, but because it spends most of its day hiding under rocks and other objects, this species is elusive and rarely seen. Since no scientist has made an effort to study the behavioral quirks of this species, much of what we know about it from comes from the study of other geckos.

The scientific name of the Virgin Islands dwarf gecko is Sphaerodactylus parthenopion. Sphaerodactylus, which means round finger in Greek, is a genus of small geckos, found mostly scattered throughout the Caribbean and Central America. In terms of species count, it’s one of the most abundant genera of lizards in the world. Parthenopion appears to derive from a Greek word meaning virgin or young woman, obviously referring to the island on which it’s found. Experts believe that it’s closely related to the dwarf sphaero of nearby Puerto Rico. The two species probably shared a common ancestor in the not-too-distant past. Body size, coloration, and its remote habitat are the main factors that distinguish it from other species.

The Virgin Islands dwarf gecko holds the distinction of being one of the smallest reptiles in the entire world. In fact, it’s among the smallest amniotes, a group that also includes mammals and birds. Only the Jaragua dwarf gecko from the same genus can compete with it for sheer smallness of size. The body measures an average of 18 millimeters from the snout to the base of the tail (barely larger than a US dime), while the tail itself is nearly as long as the body. The gecko is identified by brown coloration on its upper side, speckled with darker scales and lighter stripes behind the eyes and at the top of the neck. It’s believed that the females are slightly larger in size compared to the males, but otherwise, there are no differences in shape or coloration.

Like many other species of geckoes, the Virgin Islands dwarf lacks eyelids of any kind, though it does have a protective membrane covering the entire eyeball. In order to keep their eyes moist and clean, it will lick the eyeballs with its tongue. Another important defining trait of the entire genus is round (rather than vertical) eye pupils, which enables it to see better in day and evening hours instead of nighttime. The eyes can also move independently of each other. Finally, this species has a round adhesive scale on each foot so it can cling to surfaces.

Very little is actually known about the behavior of the dwarf gecko. Because this species is difficult to find and track in the wild, scientists have been unable to observe how it lives. The species is known to spend a great deal of the day hiding under rocks, attempting to retain as much water as possible. Like other reptiles, the dwarf gecko is entirely dependent on the surrounding environmental temperature to keep warm. Moreover, it seems probable that this species, like other geckos, has the ability to store fat in its tail for times of food scarcity, so its tail would be a sign of the gecko’s overall health.

This gecko is almost certainly solitary in nature, except when males and females come together for the mating season. If they’re anything like other geckos, then the Virgin Islands dwarf is probably territorial to some degree and perhaps a little aggressive toward trespassers. It has unique vocalizations, which might include chirps and barks, to communicate with other members of the same species. They may also communicate through secretions and smell.

The Virgin Islands dwarf gecko, as the name suggests, is completely endemic to the large archipelago of the British Virgin Islands, located just to the east of Puerto Rico in the Caribbean Sea. Its presence has only ever been documented on three of the islands: Virgin Gorda, Tortola, and Moskito Island. While some scientists have suggested that this species might exist across the entire Virgin Islands archipelago, no one has been able to find any evidence for this so far. Its natural range overlaps with the big-scaled least gecko of the same genus.

The dwarf gecko is usually found in semi-arid or dry scrub forests on rocky hillsides. It gravitates naturally toward moist microhabitats, such as the underside of rocks or leaves, to prevent water loss from its body. The amount of water it loses during the day is all the more pronounced, given that it prefers to live in dry areas with only sporadic rainfall. This means a great deal of its survival strategy is simply devoted to water retention.

The Virgin Islands dwarf gecko is most vulnerable to predators, habitat loss, droughts, and invasive species and diseases. Unfortunately, conservation efforts are currently hindered by a lack of information about this species. It is not known whether population numbers are falling, and if so, what exactly is causing their decline.

It isn’t known exactly which predators feed upon the Virgin Islands dwarf gecko, but it’s likely to be some combination of birds, snakes, and small mammals.

What does the Virgin Islands dwarf gecko eat?

The Virgin Islands dwarf gecko is thought to eat small insects. It probably stalks prey and then gobbles them up with its relatively long tongue. Obviously, given the size of this species, it’s limited in what it can consume.

Virgin Islands dwarf geckos will try to time their mating sessions with the height of the rainy season. This gives their offspring the best chance to survive the harsh conditions. Not much else is known about its reproductive behavior, but based on studies of closely related species, the female probably lays a few eggs in a safe location, where they’re unlikely to be found by predators. They hatch after a few weeks or months, though the exact incubation time is not known. Parents play very little role in the development of the young and usually go on to produce more clutches throughout the breeding season once the first clutch is secured.

The young survive the early stage of their lives by consuming the leftover egg yolk and old skin for sustenance. After the first few days, they must learn how to hunt and feed on their own if they hope to survive. They also shed skin frequently during this stage as they grow. The average lifespan of this particular species is not known, but geckos, in general, can survive about five or six years in the wild. They’ve also been known to live about 10 to 20 years in captivity.

The Virgin Islands dwarf gecko is currently classified as an endangered species by the IUCN Red List. This endangered status is mostly due to its small range. The species is only known to occur on three islands in the Caribbean, which clearly has a limiting effect on population numbers. However, it is not known how many of these geckos currently live in the wild. There isn’t even a rough estimate of numbers, because no one has made an exhaustive effort to collect data about them. As a result, it is difficult to implement conservation efforts to bolster their numbers.

View all 6 animals that start with V

Are the Virgin Islands dwarf geckos carnivorous, herbivorous, or omnivorous?

The Virgin Islands dwarf gecko is thought to be mostly carnivorous. It survives by feeding on small insects.

What is a Virgin Islands dwarf gecko?

The Virgin Islands dwarf gecko is a small species of lizard – perhaps the smallest in the entire world. It is found exclusively on the islands of Virgin Gorda, Tortola, and Moskito, which together make up the British Virgin Islands. Characterized by the brown scales and the light stripes around the eyes, this gecko spends most of its day hiding under rocks and leaves to retain as much moisture as possible. It’s thought to lose more moisture than almost any other species of lizard.

How big is a Virgin Islands dwarf gecko?

The Virgin Islands dwarf gecko averages about 18 millimeters from the snout to the base of the tail. By comparison, this is about the same size as an American dime.

Where can you buy a Virgin Islands dwarf gecko as a pet?

Due to their elusive nature and small size, it is not normally possible to find the Virgin Islands dwarf gecko for sale anywhere as a pet, even at specialty reptile shops. If you want to purchase a sphaero type gecko as an exotic pet at a reasonable price, then you should opt for something like the ashy gecko. Measuring a few inches in size, the ashy gecko is large enough to interact with people but small enough to house in a reasonably-sized enclosure. The price of an exotic gecko depends on its size and rarity. Fortunately, the price to house and feed this pet is quite small.