Click through all of our Zebra Finch images in the gallery. 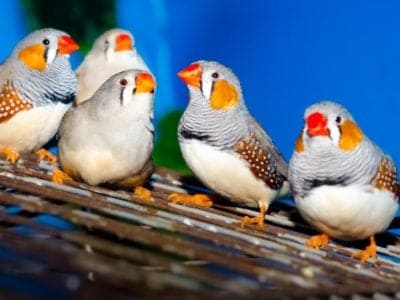 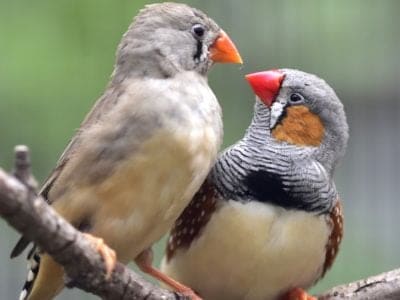 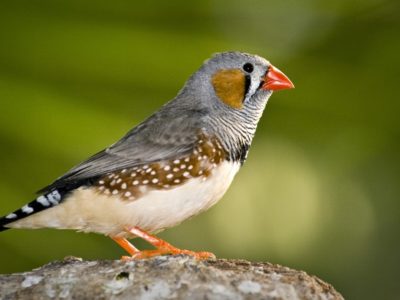 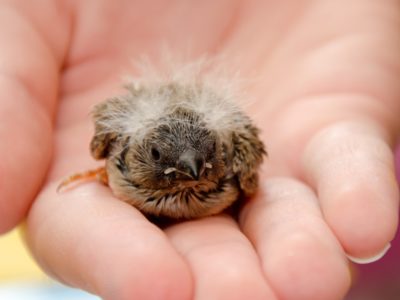 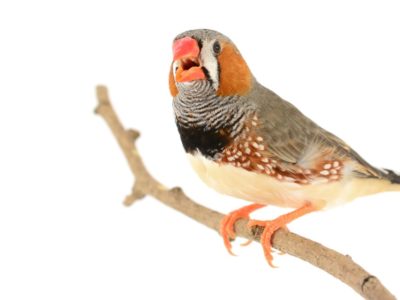 View all of the Zebra Finch images!

The zebra finch is a small songbird (and a formal member of the estrildid finches) whose origin is the southern Pacific region.

Perched atop a branch or log, the male emits a unique composition of his own making to woo a prospective mate. Common in the wild, they are also fairly popular in the exotic pet trade for their gregarious behavior and upbeat, almost conversational voices.

Where to Find the Zebra Finch

The zebra finch’s original habitat is the dry savannas and grasslands of Australia and Timor (a Pacific island divided between the nations of Indonesia and East Timor). From these small origins, it has spread around the entire world as a domestic pet.

The zebra finch can construct a nest almost anywhere, including trees, bushes, or burrows, out of grasses, feathers, or wool.

The scientific name of the zebra finch is Taeniopygia guttata. Guttata is derived from a Latin term that means spotted or speckled. The zebra finch belongs to the family of tropical Australian/Asian finches called estrildids. The genus to which it belongs is far less certain, however. Some experts have classified the zebra finch (and the closely related double-barred finch) in the genus Poephila, while others insist on a separate genus of Taeniopygi. Most analysis supports the latter notion that both the zebra and double-barred finch are members of their own separate genus. There are also two subspecies of zebra finch, one from the island of Timor and the other from Australia.

This finch is a small bird, measuring no more than 4 inches in length, with a plump body, short beak, and slender legs. There is a strong element of sexual variation in the plumage. Males exhibit an unusual patchwork of colors, including a gray hooded head, striped black and white tail that gives it the name, orange patches on the cheek and the sides, and a red beak. Females, however, have simpler gray-colored bodies with orange beaks.

Occasionally, a novel mutation will arise and give birth to new color morphs. While these color morphs are quite rare in nature (they almost never become “fixed” in a population), they can be selected and then amplified by people through successive breeding of that rare mutation. These can produce unusual color combinations like orange breasts, yellow beaks, black cheeks, or all-white plumage.

The social life of the zebra finch revolves around large flocks of about 100 individuals (or only about 50 as the breeding time approaches). These birds do most of their hunting, roosting, and preening in close proximity to other members of the flocks. While they do sometimes travel together a few miles in search of food, flocks also have a defined home range from which they rarely stray for long. Zebra finches are quite friendly and gregarious; they have the ability to recognize and distinguish other individuals, but they will also sometimes chase away outsiders from their home range.

One of the most interesting aspects of zebra finch behavior is the male’s ability to create beautiful songs to attract a mate. They learn to sing from a father or male tutor and then gradually begin to practice the song over the first few weeks of their lives. One study suggests they even lip sync in their sleep, perhaps as a way to package and store long-term information about the song in the brain. The tutor’s song functions as a template, but the chick will add their own variations over time. In this way, no two songs are exactly the same. While bird song is a male-only behavior, both sexes are able to make several complex sounds to communicate with each other.

This finch is an omnivorous bird, although the bulk of its diet consists of plant matter.

What does the zebra finch eat?

The zebra finch consumes various types of seeds, fruits, vegetables, and insects. Their stout beaks are well-adapted for dehusking seeds.

These finches are currently classified as a species of least concern by the IUCN Red List. Besides natural predators and diseases, this species is not currently threatened by human activity.

What eats the zebra finch?

The zebra finch is preyed upon by marsupials, snakes, and birds of prey. The eggs are also consumed by mice.

These finches have a highly flexible and opportunistic breeding strategy. Instead of a defined mating season, this bird will wait until there is a substantial amount of rainfall to begin the mating process. The male will then engage in a complicated courtship dance and a unique song they’ve cobbled together. The finch forms lifelong monogamous pair bonds, but based on DNA analysis, it’s also known that they engage in infidelity as well.

After mating, the finch will begin to construct a nest so it can lay a clutch of four to six eggs over a span of a few days. The male is responsible for guarding the nest, while the female incubates the eggs. After the eggs hatch two weeks later, the chicks sport a simple gray plumage like the mother. Both parents will take turns sitting on the nest and feeding the young. The chicks will begin to fly for the first time after three weeks, but it will be another two weeks before they are fully independent of their parents. When all the chicks have departed the nest, the parents may lay another clutch of eggs.

These finches have a relatively short lifespan of about two to three years on average. Because of predation, disease, or accidents, many of them die within the first year of their lives. When they’re in human care, however, the average lifespan is five to seven years.

While it’s not known how many of these finches remain in its wild habitat, population numbers appear to be fairly stable.

View all 6 animals that start with Z

Does the zebra finch migrate?

No, the zebra finch is a sedentary bird.

How many eggs does the zebra finch lay?

The zebra finch lays four to six eggs per clutch, but it can lay multiple clutches per year.

How fast does the zebra finch fly?

The top flight speed is unknown.

What is the zebra finch’s wingspan?

The zebra finch has a wingspan of about 8 to 9 inches.

When do zebra finches leave the nest?

Chicks leave the nest of origin about five weeks after hatching.

Is a zebra finch a good pet?

The zebra finch is often desired as a pet for its small size, docile and friendly temperament, unique plumage, easy care, and beautiful song. But keep in mind, these birds do need large cages at least 30 inches long to fly around in. They also do not generally respond to human commands or form strong bonds with people. Do not force contact on them, but instead let the bird decide when to interact with you.

How many zebra finches should be kept together?

Since housing size is a constraint, two or three zebra finches are usually fine together.

Can a zebra finch live alone?

Since the zebra finch is highly social, it’s ideal to house multiple birds together.

How long do zebra finches live as pets?

In captivity, the zebra finch can live five years or more. The maximum lifespan is around 12 to 15 years.

What do zebra finches eat?

The zebra finch will do best in your care with high-quality seed mix, fruits, vegetables, and other greens.