Has a transparent 3rd eyelid to protect eyes in the water!

Click through all of our Caiman images in the gallery. 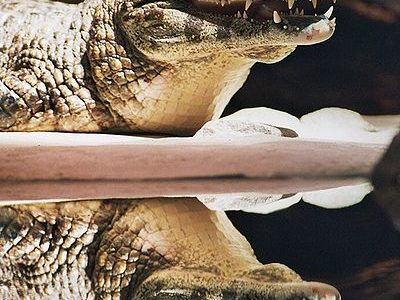 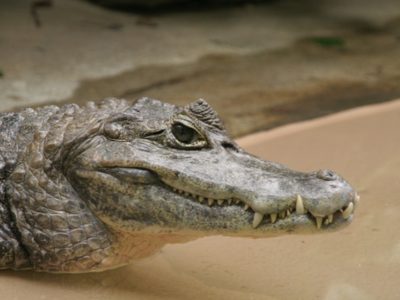 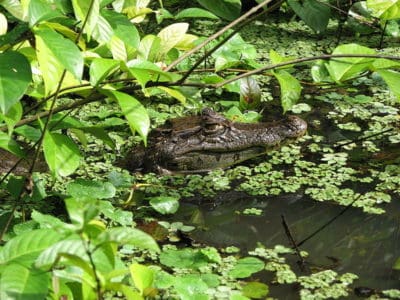 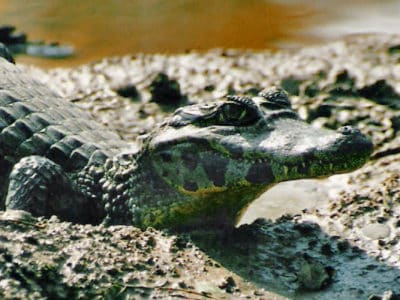 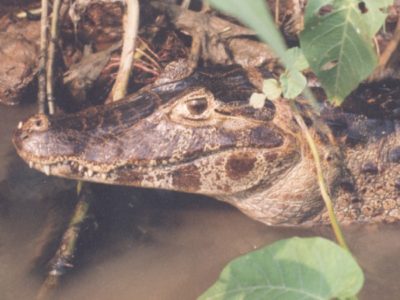 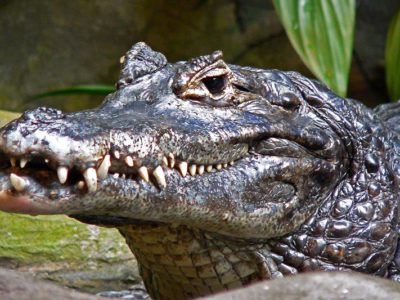 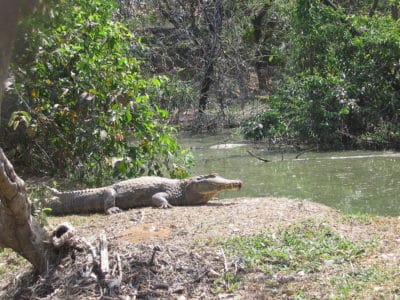 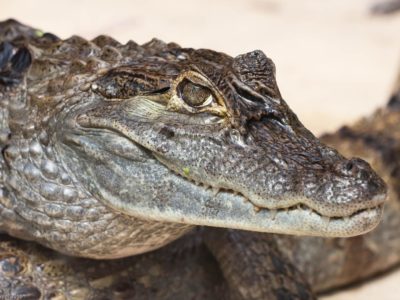 View all of the Caiman images!

There are six species of caiman found in a variety of wetland habitats throughout Central and South America. Caimans are animals that are most closely related to alligators with which they share a number of similar characteristics. Like other crocodilians (a group of reptiles that includes crocodiles, alligators, caimans and gharials), caimans are one of the longest surviving species on the planet having evolved very little over the past 200 million years. They have no close living relatives and belong to a group of reptiles called archosaurs (which included dinosaurs), where other reptile species belong to a different group. Despite the fact that the dinosaurs became extinct 65 million years ago, caimans along with the other members of the crocodilian group are still going strong.

Caimans are animals that have wide, slightly flattened bodies and a long vertically flattened, muscular tail that propels them through the water with immense power. Like other crocodilians, their nostrils and eyes are located on the top of their snout and head which means that they can still both breathe and see whilst being almost fully submerged and hidden in the water. Caimans (like alligators) have wide, flat heads with a rounded snout that allows them to prey on larger animal species with ease. Their strong jaws contain a row of cone-shaped teeth, that when snapped shut drives them into their prey. Caimans cannot chew so swallow smaller prey whole. With larger animals, they use their sharp teeth and powerful bodies to tear at the flesh and are known to store larger prey species in underwater larders until they begin to decay and are therefore easier to consume. Caimans range in size from 1.5m long to 6m long depending on the species. Black caimans are the largest caiman species and have dark grey to black coloured, plated skin. Other caiman species range from a dull olive to grey or brown in colour with a lighter underside. All have webbed feet with five toes on their front feet and four on their hind feet.

Caimans are found inhabiting a wide range of wetland habitats throughout Central and South America, the exact locations and habitat preferences are dependant on the species. Spectacled caimans (also known as the common caiman) are the most common and wide-spread species and have also been introduced into areas outside of their natural range including Puerto Rico and Cuba. They are found inhabiting rivers, lakes and swampland. They prefer stiller waters compared to black caimans that are larger in size and can therefore withstand stronger currents. Crucially, this difference in habitat preference also means that in areas where the range of the larger black caiman overlaps those of smaller species, there is less competition for territory between species as they occupy different habitat niches. Due to the fact that spectacled caimans prefer stiller waters, they are known to also reside in man-made waterways like canals and reservoirs.

Caimans spend most of the daytime hours resting in the water or basking on river banks in the sun and are mostly active at night. Although all caiman species are semiaquatic, some spend more time on land than others. Spectacled caimans rarely leave the safety of the water where black caimans often leave the water under the cover of dark to hunt for larger prey species on land. Males are highly territorial and quickly establish dominance hierarchies, with more dominant male caimans gaining access to more preferable territories and they also mate with more females. Spectacled caimans rely so heavily on their watery habitats that during periods of drought they will burrow into the mud. Here they are able to enter a dormant state to avoid desiccation (extreme dryness).

Caimans become sexually mature when they are between four and ten years old, depending on the species. The timing of the breeding season is also species dependent: spectacled caimans breed during the wet season in May and June, where black caimans breed during the dry season. Females build nest mounds from either vegetation or mud that can be up 1.5 meters in height. Between 30 and 65 eggs are then laid in a conical hole made at the top of the mound which hatch after around three months. Female caimans guard their nests during this time, with spectacled caiman females known to lay eggs in the same nest which they then guard together. When they hear the hatchlings calling, the female caimans then help their young to the water by carrying them in their mouths. Female caimans remain with their young for up to a year to protect them from predators. Juvenile caimans are lighter in colour than adults but these markings fade as the caiman ages, they live together in large groups called creches.

Caimans are formidable predators that hunt and consume a wide variety of animal matter. Due to their largely aquatic lifestyle, fish (such as catfish and piranha), crustaceans and other small-sized aquatic animals make up the bulk of their diet. They are also known to hunt birds (particularly waterfowl) along with amphibians and small mammals. Capybara and wild pigs are an important food source for many caiman populations, while large black caimans venture onto land during the night to hunt for larger prey including humans. Caimans use a variety of techniques in order to hunt prey species but most commonly remain close to the river banks and lie in wait for mammals to come to the water to drink or to cross to the other side. They are also known to glide up to prey, silently drifting through the water with just their eyes and nostrils exposed in the hope that they can sneak up on waterfowl without being seen.

Due to their large size and formidable nature, adult caimans have very few predators within their natural environments. Large big cats such as jaguars are the most common and successful predators of caimans. The small size of young caimans however, means that they are easier targets to be preyed upon by other animal species. Along with wild cats, birds of prey, snakes and omnivorous mammals such as wild pigs, are all known to prey on the more vulnerable juveniles. Caimans are also threatened by habitat degradation throughout much of their natural range in the form of deforestation and water pollution. They have also been the subjects of hunting for their skin and for their meat.

Unlike mammals that have just two sets of teeth that last them for their whole lives, caimans continuously shed and replace their teeth in order to keep them razor sharp. The new set of teeth grows beneath the existing one, pushing the old tooth out when the new one is fully developed. Due to their semi-aquatic lifestyle, caimans have a number of fascinating adaptations that help them to survive more successfully in the water. Like other crocodilian species, caimans have a third transparent eyelid which helps to protect their eyes when they are in the water without compromising their sight. They also have flaps over the external parts of their ears and nose that close to prevent water from entering them and a special flap at the back of their throat. This allows caimans to catch fish whilst swimming with their open mouths but prevents water from entering their lungs.

Caimans have been hunted by people for their tough skins that are most commonly used in the production of clothing, primarily shoes and to make bags. They are also hunted locally for meat which is an important protein source to some populations. In more recent years, they have been heavily affected by habitat loss to make way for growing human settlements and also to clear land for agriculture. Black caimans are particularly feared by local people, as their large sized, powerful bodies have meant that they are capable of hunting people within their range.

Today caimans are listed by the IUCN as animals that are of Least Concern of becoming extinct in the near future. Despite enormous population declines (the black caiman population is thought to have diminished by 99% over the past 100 years), they are still thriving in certain regions. Interestingly, the demise of larger crocodilian species throughout Central and South America has led to the extension of their range in some areas.

Are Caimans herbivores, carnivores, or omnivores?

Caimans are Carnivores, meaning they eat other animals.

What Kingdom do Caimans belong to?

Caimans belong to the Kingdom Animalia.

What class do Caimans belong to?

Caimans belong to the class Reptilia.

What phylum to Caimans belong to?

Caimans belong to the phylum Chordata.

What family do Caimans belong to?

Caimans belong to the family Alligatoridae.

What order do Caimans belong to?

Caimans belong to the order Crocodilia.

What type of covering do Caimans have?

Caimans are covered in Plate-like scales.

What genus do Caimans belong to?

Caimans belong to the genus Caimaninae.

Where do Caimans live?

In what type of habitat do Caimans live?

What are some predators of Caimans?

Predators of Caimans include jaguars, wild pigs, and birds of prey.

What is an interesting fact about Caimans?

Caimans can grow to up 6 meters long!

What is the scientific name for the Caiman?

What is the lifespan of a Caiman?

How many species of Caiman are there?

There are 6 species of Caiman.

What is the biggest threat to the Caiman?

The biggest threats to the Caiman are habitat loss and hunting.

What is another name for the Caiman?

How many Caimans are left in the world?

The population size of the Caiman is unknown.

How fast is a Caiman?

A Caiman can travel at speeds of up to 25 miles per hour.