Caiman lizards are among the largest lizards.

Click through all of our Caiman Lizard images in the gallery. 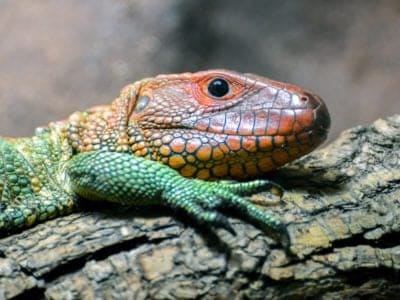 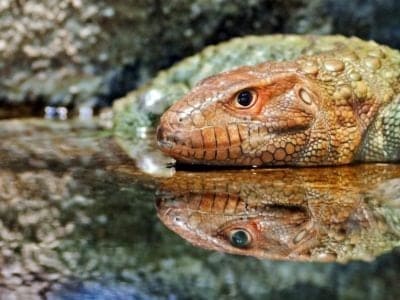 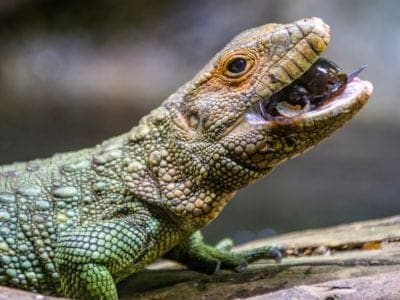 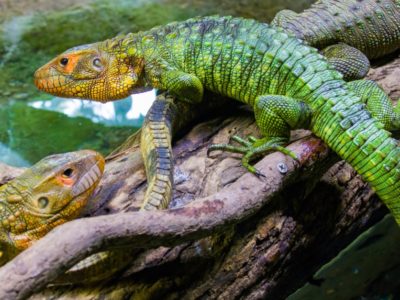 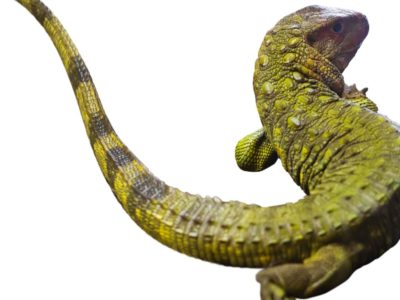 View all of the Caiman Lizard images!

Caiman lizards are a large semiaquatic reptile species originating in South America. The Caiman lizard is one of around 5,000 species of lizards. Occasionally referred to as water tegus, these lizards love the water and are fantastic swimmers. Although considerably smaller than the well-known crocodilian caiman, they have some similarities such as the scales along their backs, their characteristic tail, and their comparable habitats.

“New World Runners” is another name for this family. These lizards belong to the Squamata order and the Reptilia class. The word Dracaena is derived from the Greek drakaina, the female version of drakon meaning “serpent or dragon.” Guianensis means “of or from French Guiana” and in the same sense, Paraguayensis means “of or from Paraguay.”

A male lizard’s maximum length is about as tall as actor Danny Devito. These lizards have thick, stocky bodies and elongated, flat tails. Covering the lizard are large scales that are similar in appearance to those on crocodiles. Their limbs are short but strong, allowing them to quickly evade danger.

These lizards have a bifurcated (forked) tongue, powerful jaws, and small rounded teeth. Additionally, they have very sharp claws. They use their tongue to smell and detect food. Possibly the most impressive feature of these lizards is their third, clear eyelid. This unique mechanism acts as goggles to help them see while swimming underwater.

There are some physical traits unique to each subspecies. For instance, the coloring varies between the two. Northern Caiman lizards usually have fairly vibrant hues including a green body, red or orange head, and brown or black tail. Paraguay Caiman lizards, however, have less colorful, muted tones such as gray or tan from head to tail. Males of the Northern variety tend to have a broader and brighter red-colored head than their female counterparts.

These lizards are believed to be present-day relatives of the extinct Dracaena columbiana. They are also related to tegus and whiptails who, likewise, belong to the Teiidae family.

A group of lizards is called a lounge. Caiman lizards have been described as neither social nor solitary. Caiman lizards can thrive on their own but they are generally not aggressive and can live in harmony with other lizards as well. This is due to their even-tempered nature.

These lizards are highly active and can run, climb, and swim extremely well. They spend a majority of their time in or close to water. Their tail aids them in swimming and may be used to defend themselves against predators by whipping it at them. These exotic lizards are diurnal. Nearly all of their activity takes place in the daytime and they primarily sleep throughout the night.

During the day, the lizards search for food near riverbanks, hunt underwater, and sunbathe on branches that hang low over the water. They use the water as a quick escape route when needed, simply plunging into the river from the branches they rest on and swimming away. At night, they sleep in bushes or trees, hidden from potential threats. Caiman lizards are tremendously smart animals.

These lizards are semiaquatic, meaning they must have both terrestrial (on land) and aquatic (in water) habitats. These cold-blooded creatures reside in warm climates. They live mostly in forests, wetlands, flooded woodlands, and savannas. They regularly reside in parts of the Amazon river basin. They need an abundance of freshwater and they frequent rivers, swamps, and marshes. Caiman lizards are native to South America. They can be found in Bolivia, Brazil, Colombia, Ecuador, French Guiana, Paraguay, and Peru.

These lizards are carnivores. They are able to easily crush shells by utilizing their mighty jaws and molar-like teeth. They bite down on the tough material, breaking it. Then they discard the hard shell pieces before eating the meat from their prey. This allows them to effortlessly feed on a variety of hard-shelled invertebrates. Their favorite meal seems to be snails, particularly apple snails.

What does the Caiman Lizard eat?

The lizard’s main diet consists of snails, crawfish, and freshwater clams. In many instances, they prey on Amazon river turtles as well. Furthermore, they will eat insects, crabs, fish, amphibians, and rodents. In captivity, these lizards are fed crickets and worms too.

These lizards face environmental threats from deforestation leading to habitat loss and from human pollution. In the past, these lizards were largely hunted for their skin and sold in the pet trade. They are now protected by the Convention on International Trade in Endangered Species of Wild Fauna and Flora (CITES). This organization aims to regulate trade and decrease animal exploitation. The Caiman lizard has been safeguarded by CITES since the 1970s and is listed in Appendix II.

The International Union for the Conservation of Nature (IUCN) currently categorizes both subspecies of these lizards as least concern on the IUCN red list. They are not in immediate danger of population decline.

What eats the Caiman Lizard?

Known predators of the these lizard include snakes such as the green anaconda, crocodiles, and jaguars.

Unfortunately, the mating rituals of these reptiles are vastly unexplored apart from the fact that they mate through sexual reproduction. It is known, however, that these lizards are oviparous. This means they lay eggs rather than giving live birth. The female lizard lays between five and ten eggs in holes dug along the riverbank. She then covers over the holes to shelter them from predators and potential hazards. The eggs incubate for about 179 days, between five and six months, before hatching.

The baby lizards, called hatchlings, emerge from their shells after the incubation period is over. When they are first born, the hatchlings are only five inches long. Baby lizards will grow roughly two feet in length within the first year. From the moment each baby hatches, they are self-sufficient and will not receive any care from their parents. Hatchlings are capable of roaming around on their own the same day they are born. Just a few hours after departing from their eggs, they can walk and swim.

These lizards typically live over ten years in captivity. Some reach the age of 12 or older. In the wild, their lifespan is unknown for certain but is believed to be around ten years. They are susceptible to commonly occurring ear and eye infections, as well as respiratory infections and parasites. In most cases, these ailments can be treated by a veterinarian.

Scientists do not know how many of these lizards there are in the wild. While their exact population number is unidentified, it is stable at this time. They remain in the IUCN’s least concern category. According to IUCN, Paraguay Caiman lizards are currently prevalent in Paraguay. It is unclear at this time if any Northern Caiman lizards still occupy French Guiana.

You can legally own Northern Caiman lizards. As long as you provide the proper care, they can make great pets. Although it takes more to care for them than a decent enclosure, it is important to remember that these semiaquatic lizards do require spacious enclosures with adequate water and land area. The enclosure should be kept at temperatures between 80 and 90 degrees Fahrenheit. It is necessary for humidity levels to be about 60 to 80 percent. The cost of a Caiman lizard, together with supplies and food, makes these pets quite expensive.

How big do Caiman lizards get?

Caiman lizards are not considered to be especially dangerous. They are easy-going and often non-aggressive.

How much does a caiman lizard cost?

Caiman lizards will bite if they are threatened, but will not normally do so when unprovoked. Their bite hurts severely.