Frilled lizards can stand up and run on their hind legs.

Click through all of our Frilled Lizard images in the gallery. 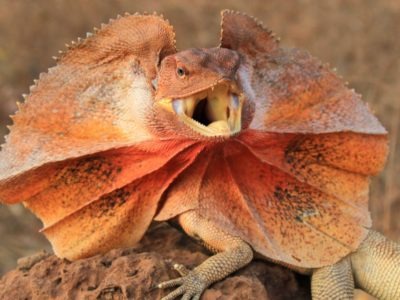 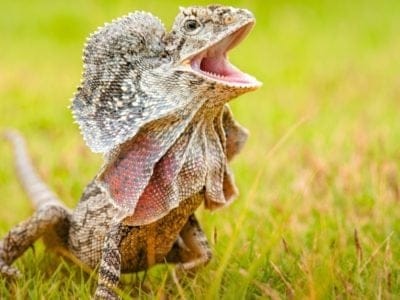 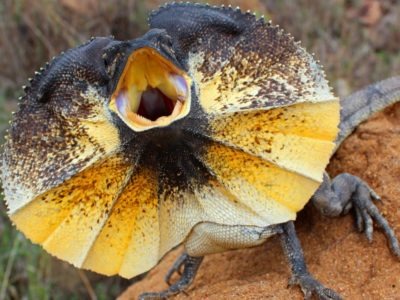 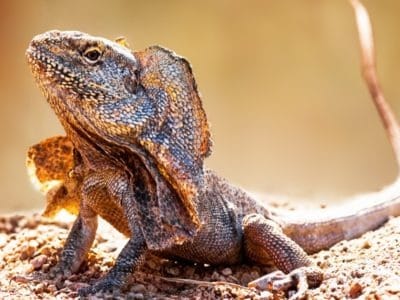 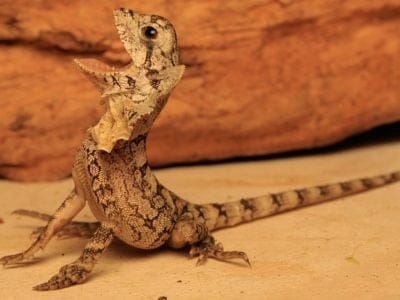 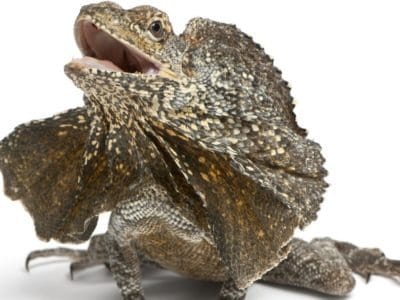 View all of the Frilled Lizard images!

“Frilled lizards can stand up and run on their hind legs”

A frilled lizard also goes by the names frilled dragon and frilled agama. It is known for raising its neck frill, or the extra flap of skin around its neck, in an effort to intimidate predators. These lizards live in northern Australia and New Guinea. Upon seeing the raised neck frill of this lizard, some people think it’s venomous or that it spits poison at predators. In reality, this reptile is not venomous and has no poison to spit!

Chlamydosaurus kingii is the scientific name of the frilled lizard. The Latin word chlamydo means small cloak while saurus means lizard. It’s also called the frilled dragon and the frilled agama. It belongs to the Agamidae family and the class of Reptilia.

There are 420 species of frilled lizard.

A frilled lizard has grayish-brown scales and is usually about 3 feet in length. Though it’s large in size, it weighs just over 1 pound. Line up two and a half bowling pins and you’re looking at the length of a 3-foot frilled lizard. A frilled lizard that weighs a little over 1 pound is about equal in weight to a can of soup.

This lizard has a long tail and claws made for hanging onto the trunk of a tree to climb it in quick fashion. The brown-gray scales of this lizard help to camouflage it in the trees.

The frilled dragon is solitary and remains alone most of the time except during breeding season.

This lizard gets its name from the fold of skin, also called a neck frill, that encircles its throat. Most of the time, this fold of skin lays flat like a superhero cape on the lizard’s body. However, when this reptile is threatened by a predator, it raises its neck frill, opens its mouth, and hisses. This makes the lizard look larger in size and threatening. In short, the animal does this in an effort to frighten a predator. Its neck frill measures about 12 inches in diameter.

Raising its neck frill usually confuses a predator long enough for the lizard to start running on its hind legs toward a tree. It makes sense. A confused predator is very likely to let a frilled lizard get away! By the way, this reptile’s clumsy run is an incredible sight to see.

The frilled lizard lives in northern Australia and New Guinea. This reptile lives in a warm environment. Its habitat includes woodland savannas as well as temperate and tropical forests.

These reptiles spend most of their time high up in the trees. Their dull, grayish-brown skin helps them to blend in with the tree trunks and branches. The scales on the neck frill of this lizard help to prevent loss of moisture in their warm environment. Frilled lizards are quick and can move up and around the trunks of trees in short bursts of speed.

These lizards are carnivores eating the food source that is most abundant in their tropical habitat.

Birds of prey such as eagles, owls and hawks, snakes, dingoes, larger lizards, and feral cats are predators of these lizards.

What does a frilled lizard eat?

Insects play a large role in the diet of the frilled agama aka the frilled lizard. Cicadas, spiders, beetles, ants, termites, moths, and butterflies are all on the menu. These reptiles also eat small mammals such as mice and rats. They’ve been known to eat smaller lizards as well.

When hunting for food, these lizards wait near a mouse’s hole or close to a dead tree where termites live. Then, when the animal appears, the lizard grabs it and won’t let it go. These lizards hunt for prey at sunrise and sunset.

This reptile has been known to consume hundreds of thousands of termites in one sitting, then not eat again for months. One termite colony may contain as many as 1 million termites and weigh up to 1,000 pounds. Picture a grand piano and you’re picturing an item that weighs 1,000 pounds.

Birds of prey, dingoes, snakes, feral cats, and larger lizards are all predators of these lizards. These lizards spend most of the time in trees.

As you see, many of its predators also have access to the trees making these lizards vulnerable. Their skin allows them to blend in with their leafy environment so they can sometimes hide. Plus, they are quick and may be able to outrun them. If a lizard climbs down to the ground in search of food, a dingo may capture it before it gets back into the relative safety of a tree.

The conservation status of the frilled agama is Least Concern. But it does face a few threats. Its habitat is threatened by deforestation. In addition, an increase in feral cats in their living environment has contributed to a decrease in their population.

There are no specific conservation plans in place for this lizard. However, there are some wildlife parks that are home to some of these lizards. Wasur National Park in New Guinea is one example.

The breeding season of these lizards runs from September to October. The male lizards compete for females by fighting and displaying their neck frills. Also, a male bobs his head up and down to get a female’s attention. Female lizards lay their eggs between the months of November to February. The eggs are laid from 1 to 8 inches below ground. These lizards usually choose to dig the hole in a sunny area, so the sunlight gives some warmth to their eggs. A female lays from 8 to 14 soft-shelled eggs in one clutch. The incubation period of the eggs is 2 to 3 months. Each egg weighs less than an ounce in size. Some females have 2 clutches of eggs per season.

Baby lizards are able to survive without any care from their parents after they hatch. Each baby is about as long as an adult’s pinkie finger! And, yes, baby lizards have full use of their neck frill. They can eat small insects including ants and termites. Generally, a lizard stays with its brothers and sisters for about 10 days before leaving to establish its own life.

The lifespan of this lizard can go as high as 20 years! In fact, a 20-year-old frilled lizard living in captivity holds the record as the oldest of its kind.

These lizards can become ill due to a lack of vitamin D and calcium. This causes lethargy and lack of appetite. Frilled lizards need a certain amount of ultraviolet light each day to receive vitamin D and absorb calcium to keep them in good health.

According to the IUCN Red List of Threatened Species, the exact population of this reptile is unknown. This is because these lizards are quick to hide making it difficult to record an accurate count. However, their official conservation status is Least Concern.

Scientists think the population of this lizard is decreasing due to threats to its habitat and an increase in predators such as feral cats.

Frilled Lizards in the Zoo

View all 37 animals that start with F

This reptile is a carnivore.

What Kingdom do Frilled Lizards belong to?

What class do Frilled Lizards belong to?

What phylum to Frilled Lizards belong to?

What family do Frilled Lizards belong to?

What order do Frilled Lizards belong to?

What type of covering do Frilled Lizards have?

Frilled Lizards are covered in scales.

What genus do Frilled Lizards belong to?

In what type of habitat do Frilled Lizards live?

What is the main prey for Frilled Lizards?

What are some predators of Frilled Lizards?

Predators of Frilled Lizards include snakes, owls, and dingos.

What are some distinguishing features of Frilled Lizards?

Frilled Lizards have long tails and large, expanding frills on their necks.

How many eggs do Frilled Lizards lay?

What is an interesting fact about Frilled Lizards?

What is the scientific name for the Frilled Lizard?

The scientific name for the Frilled Lizard is Chlamydosaurus kingii.

What is the lifespan of a Frilled Lizard?

Frilled Lizards can live for 10 to 20 years.

What does a frilled lizard eat?

Where does the frilled lizard live?

One of the many facts to remember about this lizard is it lives in a warm climate. Specifically, they live in tropical and temperate forests as well as in the savanna woodlands in the northern part of Australia.

No. These creatures don’t spit venom.

Where can I buy a frilled lizard?

There are some reptile farms that sell a variety of reptiles including frilled lizards. Some of these places let customers buy them in-person while others ship them to customers. Of course, anyone who wants to buy one of these reptiles should make it a point to learn all the facts about the care required for these warm weather creatures.

As a note, some people purchase a frilled lizard thinking they’ll enjoy seeing this creature raise its frill. However, frilled lizards kept as pets don’t raise their neck frill nearly as often as those that live in the wild.

No, frilled lizards are not dangerous. The reputation it has for being threatening is understandable when this lizard flares its neck frill, opens its bright pink mouth and hisses. However, this is all in an effort to scare predators away. In reality, this reptile is not dangerous. It’s simply trying to get out of a dangerous situation the only way it knows how!

How fast is a Frilled Lizard?

A Frilled Lizard can travel at speeds of up to 30 miles per hour.

How do Frilled Lizards have babies?