Geckos can climb up vertical surfaces

Click through all of our Gecko images in the gallery. 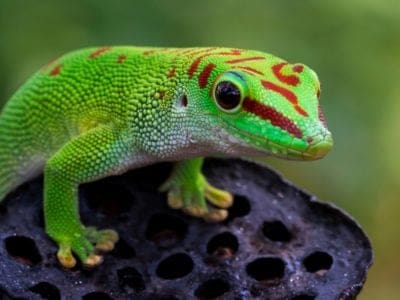 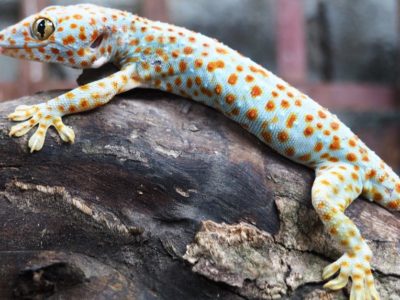 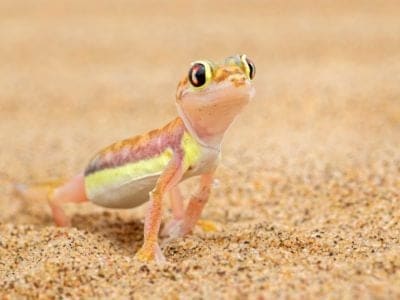 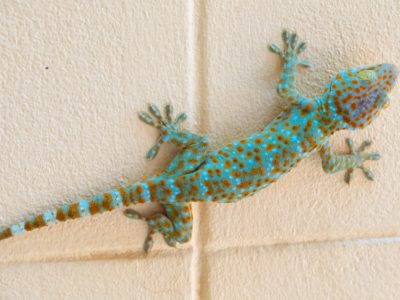 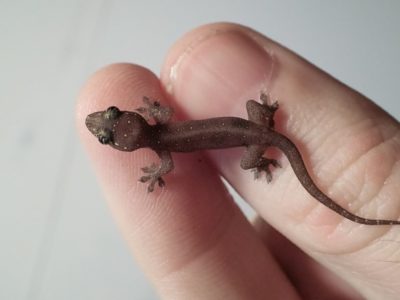 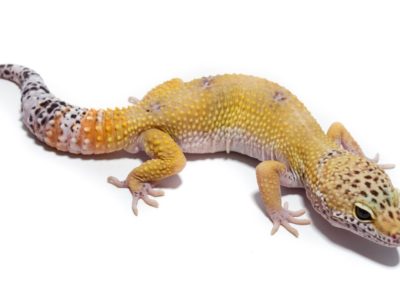 View all of the Gecko images!

“Geckos can climb vertical walls and stroll across ceilings.”

Geckos have been around for at least 300 million years. Scientists have found geckos preserved in amber that dates back to the Cretaceous Period, and those specimens look remarkably like the gentle little lizards you’ll find in so many parts of the world today.

There are approximately 1,500 gecko species, and they vary in size from the Jaragua Sphaero dwarf gecko, which measures just three-quarters of an inch long and weighs less than one-hundredth of an ounce, to the New Caledonian giant gecko, which can grow to 17 inches and tips the scales at 10 ounces. Geckos thrive in practically every habitat, including rain forests, mountains, and deserts, so long as average temperatures reach 72 degrees Fahrenheit.

Geckos are standouts among the reptile class in a number of respects:

These animals belong to a taxonomic group that shares the designation “squamate reptiles.” “Squamate” is derived from the Latin word “squamatus,” which means scaly, although these reptiles themselves don’t have scales. They belong to the infraorder Gekkota, a name thought to derive from the Indonesian-Malay “gēkoq,” which is a transliteration of the sound this animal makes.

The infraorder Gekkota is comprised of seven families:

These reptiles are small lizards with stubby bodies, large heads, tails, and—except for members Pygopodidae family—prominent limbs. The animal’s color varies widely across species. The majority are grey or brown, the better to blend in with the rocks, sand, and dirt around them and so, to escape the notice of predators. However, the leopard gecko has bright yellow skin covered with brown spots, some day geckos are an electric blue, the crested gecko is orange or red while the tokay gecko has bright orange spots.

Their tails also vary widely in shape and morphology, depending upon the species. Some are long and tapering while others are shorter and blunter, or even globular. These reptiles store fat in their tails so they’ll have access to calories when food sources are scarce. Their tails have evolved to fall off easily when the animal is pursued by predators. When this happens, the animal will regenerate its tail. Their tails actually have their own nerve control center that allows the tail to move and lunge independently for up to half an hour after its separation from the body.

These reptiles have approximately 100 teeth. Their teeth don’t grind down because they replace their teeth every three to four months.

Their skin is covered with millions of infinitesimal, hairlike spines that are very soft to the touch. These spines trap water droplets that keep dust and other air contaminants away from the gecko’s skin. The microscopic hairs that cover their toes are called “setae.” These hairs work differently than the hair that covers the animal’s body. Setae are actually tiny enough to activate molecular Van der Waals forces that enable geckos to easily climb vertical surfaces, like walls, and even to move comfortably on ceilings.

Although a few species are active during the day, they are primarily nocturnal animals, and the design of their eyes shows it. All but a few species have translucent membranes covering their eyes instead of eyelids. They lick their eyeballs to keep them clean! (The leopard gecko is unique here in having moveable eyelids.) Their pupils are vertical, and their eyes can be up to 350 times as sensitive to light as human eyes. These lizards also have a sophisticated auditory system; they’re capable of hearing sounds pitched at high frequencies that other reptiles cannot hear.

Though these reptiles are not particularly social animals, they have a sophisticated vocal communication system when compared with other lizards. They have true vocal cords. They bark and chirp to define their territory, to attract mates, and to elude predators; they also hiss and emit high-pitch squeaks. The New Caledonian gecko has such a distinctive growl that native tribes of those islands dubbed it “the devil in the trees.” The leaf-tailed gecko of Madagascar emits a distress call that many liken to a child’s scream.

They also use their tails to communicate with other geckos. Slow, wiggling movements indicate awareness of another animal’s presence while more vigorous shakes are defensive maneuvers designed to distract or evade predators.

Another characteristic of their behavior is head shaking. This movement is associated with feeding, and it helps the animal pass food from its throat to its stomach.

Most species are nocturnal. The night is the time when they climb most actively. They kos are swift runners, too; flat-tailed house geckos have been clocked at three feet per second, and they can scamper over the surface of the water.

These reptiles live in a variety of warm habitats on every continent of the globe except Antarctica. The immense amount of morphological variation found in different species reflects the ways that they have evolved to fit into their specific habitats. The Northland tree species, for example, owes its bright green color to the New Zealand forests and scrublands it inhabits. The leopard gecko with its yellowish skin and black spots blends in well with the semi-desert terrain of its native Pakistan, India, and Afghanistan. Red-spotted tokay species are well concealed in the lowland or submontane rainforests of southeast Asia while black-spotted tokay species have adapted to the rockier regions of Vietnam and China.

These reptiles are primarily insectivores, but they also eat worms, fruit, and flower nectar. Leaf-tailed geckos like to snack on land snails. Large species kos such as the New Caledonian gecko have even been known to eat small birds and rodents.

What do geckos eat?

Predators include snakes, birds, spiders, and species introduced by humans such as dogs and cats. In the tropical rainforests of northern South America, these animals are stalked by the much smaller goliath tarantula, which uses its venom to paralyze the gecko and liquefy its flesh. Raptor birds such as hawks and owls typically live in climates too cold for geckos, but when temperatures drop below freezing and these birds travel south, these reptiles become a favorite prey.

Most species aren’t in danger of extinction, but a few species are on the International Union for Conservation of Nature’s Red List. The crested gecko of New Caledonia, for example, was thought to be extinct for many years after its initial sighting in 1866 until it was rediscovered in 1994. Two other New Caledonian species, Bavayia goroensis and Bavayia ornate, are on the Red List because mining activities are shrinking their habitats.

Males attract females by making distinct mating sounds and by vibrating his tail. While mating, the male grasps the skin at the back of the female’s neck in his jaws and tucks his tail beneath her abdomen, bringing the animals’ cloacal openings in close proximity so that fertilization can occur. Some species, however, such as the mourning gecko found in Central and South America, can reproduce through parthenogenesis.

Most of these animals lay eggs. Gestation periods vary widely in length: The leopard gecko may lay her eggs 16 to 22 days after mating while a harlequin gecko’s pregnancy can last three to four years. Forty-three species endemic to New Zealand give birth to live young.

The typical egg clutch size is two, and the eggs are laid on the ground beneath rocks and tree bark. Their eggs can take between 35 and 90 days to hatch. Females show no interest in eggs or hatchlings once they’ve laid their eggs. Though many hatchlings have body markings that are different from those of adults, they move, behave and respond to their environments exactly like adults.

In captivity, these reptiles have relatively long lifespans. Leopard geckos, for example, typically live between 15 and 20 years. In the wild, they live for approximately five years if they aren’t preyed upon.

Scientists believe that these retiles originated in Southeast Asia some time during the Lower Cretaceous, but they are now found in large numbers in practically every place in the world where the average temperature is 72 degrees Fahrenheit or larger. It would be impossible to estimate the number of them currently on the planet.

Geckos In the Zoo

Every zoo that has a reptile house is likely to be exhibiting at least a few specimens. Zoos with noteworthy reptile collections include the San Diego Zoo, the Fort Worth Zoo, the Saint Louis Zoo, the Los Angeles Zoo, and the Bronx Zoo.

Are Geckos herbivores, carnivores, or omnivores?

Geckos are Carnivores, meaning they eat other animals.

What Kingdom do Geckos belong to?

Geckos belong to the Kingdom Animalia.

What class do Geckos belong to?

Geckos belong to the class Reptilia.

What phylum to Geckos belong to?

Geckos belong to the phylum Chordata.

What family do Geckos belong to?

Geckos belong to the family Gekkonidae.

What order do Geckos belong to?

Geckos belong to the order Squamata.

What type of covering do Geckos have?

Geckos are covered in scales.

In what type of habitat do Geckos live?

What is the main prey for Geckos?

What are some predators of Geckos?

Predators of Geckos include snakes, birds, and spiders.

How many babies do Geckos have?

The average number of babies a Gecko has is 2.

What is an interesting fact about Geckos?

There are thought to be over 2,000 species of Gecko!

What is the lifespan of a Gecko?

How fast is a Gecko?

A Gecko can travel at speeds of up to 30 miles per hour.

What is a gecko?

Geckos are small, nocturnal lizards found in all the warm parts of the world. They are known for their ability to scurry up vertical surfaces, and they are the only lizard species with true vocal cords.

Where are geckos from?

Geckos are thought to have evolved in Southeast Asia some time during the Lower Cretaceous, but today, they can be found on every continent except Antarctica.

No! Geckos are gentle creatures, though, in captivity, they have been known to nip humans from time to time if they’re feeling threatened because they’re being handled roughly.