Able to run as quickly backwards as forwards!

Click through all of our Hamster images in the gallery. 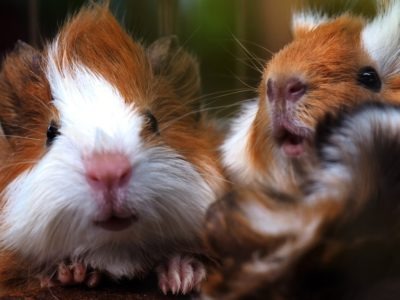 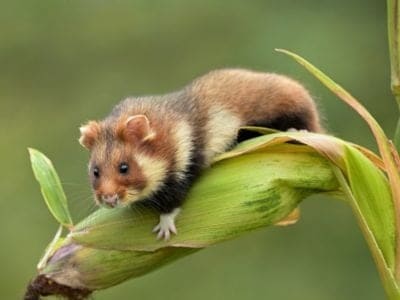 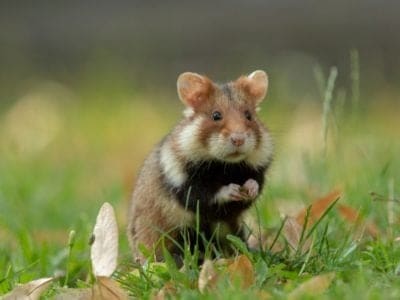 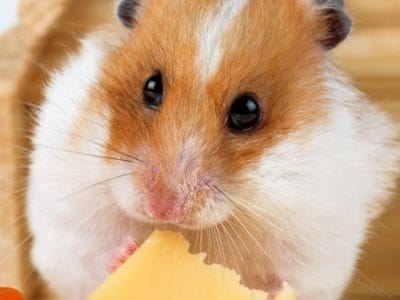 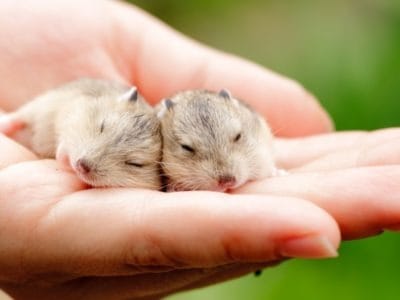 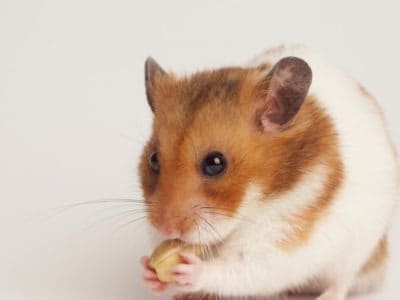 View all of the Hamster images!

Hamsters are small-sized rodents. They are very commonly kept as house pets. However, unlike other rodents, they have short tails.

Their legs are stubby with widely-spaced feet, and their ears are small. Hamsters are found in a variety of colors using grey, yellow, black, white, brown, golden, and red. They exist in a mixture of several colors. They are usually 2 to 6 inches long and weigh about 6.2 oz on average.

There are several types of hamsters including dwarf hamster, golden dwarf, Syrian hamster which are also known as the teddy bear hamster. They go by the scientific name Cricetinae.

Hamsters go by the scientific name Cricetinae. They belong to the kingdom Animalia and Phylum Chordata and the class is Mammalia. The hamsters belong to order Rodentia and suborder Myomorpha.

The family is Cricetidae and the subfamily is Cricetinae. The lower classification of the hamsters includes the subphylum which is Vertebrata. Meanwhile, the superfamily is Murodiea.

The name Cricetinae can be broken down into two words – cricetus and -inae (a suffix). Cricetus is rooted in New Latin, though it may come from the Czech word “křeček.”

Though most species have fairly similar bodies, each one has identifying markings and sizes that determine which species they are. The dwarf hamster, much like their name, is a very tiny rodent. They are about 2 to 4 inches long.

On the other hand, the Syrian hamster is quite different. It also referred to as a teddy bear hamster or golden hamster, growing to approximately 6 inches long as an adult. On average, a hamster weighs about 6.2 ounces, making it rather small with very little muscle.

In general, hamsters have thick and silky fur, and it could be long or short depending from hamster to hamster. This fur comes in a variety of colors, including black, grey, yellow, red, brown, and white. Some hamsters also have fur that is a blend of several different colors, but the combination will be determined by the breed.

Interestingly, hamsters have a natural way to get out of trouble when they need to escape – their skeletons. The flexibility of their rib cage allows them to flatten their body under small crevices. Anyone that owns such a pet will need to have a secure cage to keep them from escaping.

Most wild hamsters are active during dusk time and night and need plenty of space to play at night time. Some of them can easily run up to 5 miles during this time. When hamsters are kept as pets, they maintain this natural routine.

Their waking hours take up the nighttime, whether in the wild or in captivity, which means that they are awake during the night. They prefer to be undisturbed, so wild hamsters will avoid other wildlife and people during this time. Any unwarranted disturbance in their sleep could very well lead to a bite from these tiny rodents.

They survive best in rooms where the lights are not kept on till very late. In the wild, many hamsters dig burrows, and several others are solitary creatures, which is why they need plenty of areas to conceal themselves. Wild hamsters hibernate during the cold weather months. These rodents get up during their hibernation periods only to eat occasionally.

A loner hamster, it is said, should never be put in a cage with other hamsters as it can bite and harm it and, in some cases, even kill it. The only time that these animals are especially friendly towards other hamsters when they are young (i.e., under three months old). They will even eat their young if they so desire.

The dwarf hamster is an exception. They are surprisingly social, and they enjoy having multiple friends around in their family.

In captivity, hamsters can sometimes flinch, grimace, and raises its hand towards the owners. This simple motion is an indication that the hamster may be ready to attack, showing exactly how they feel about the person infiltrating their safe space.

If a human earns the trust of a hamster as a pet, the animal will gently move towards their hand and even crawl into it. They are fairly expressive animals, and there will be no doubt how they feel about their owner or surrounding animals.

The first of this small rodent was found in Syria. However, they are also found in Belgium, northern China, Romania, and Greece. In the wild, hamsters prefer living in warm and dry areas. They like living in steppes, edges of deserts, and sand dunes.

Hamsters have also become an incredibly popular pet, and there are many toys and hideaways that can be added to their home to recreate their natural surroundings.

Interestingly, hamsters have pouches on the inside of their cheeks, and they carry food in these pouches to store and eat later.

Hamsters are known to defend themselves against these predators by using their incisors which are large in size. The mother hamsters also carry their children to safety by putting them in the pouches in their mouths.

The predators of this small animal are numerous since they are small and easy to pick up. However, they are quite fast and spritely.

The common predators of hamsters include snakes, birds, and other predatory mammals. That doesn’t mean that a hamster won’t put up a good fight. Instead, they use their naturally long incisors to bite. If the hamster is a new mother, she will keep her young safe within her mouth’s pouches.

Interestingly, the most likely cause of death in hamsters isn’t being hunted – it is heart disease.

What Do Hamsters Eat?

Hamsters, in turn, feed on seeds, grains, fruits, nuts, cracked corn, small insects, lizards, and other animals. They are herbivores, so they do not seek out any other animal as prey.

These animals should never eat kidney beans, tomato leaves, or unwashed produce. All of these sources of nutrients are incredibly toxic.

Both male and female hamsters are known to be fast maters. They are known to waste no time in the process of reproduction, and it is often said that if hamsters from two separate genders are locked in a cage, the female can very quickly conceive.

The gestation period in hamsters is about 15 to 20 days. A group of hamster babies, known as a litter, is born shortly after. The hamster babies are blind till about two weeks after their birth. They have to be weaned when they are about three to four weeks old. However, these animals should be watched carefully, as they are one of many animals that may eat their young.

It is said that female hamsters give birth to two to three litters of hamster babies annually. The lifespan of these small rodents is about on to two years. In captivity, they can survive up to three years.

While it is not known how many hamsters live in the wild all over the world, it has been said that the pet-population of hamsters is around 57 million. About 11 million households have hamsters as pets.

Hamsters in the Zoo

Little is known about hamsters living in zoos. However, it is said that they multiply quickly and find their way into parks, universities, and zoos. For anyone that wants to learn more about hamsters in an up-close way, most pet stores will carry at least a few different species.

Are hamsters carnivores, herbivores, or omnivores?

How much does a hamster cost?

Are hamsters a good pet?

Hamsters make great family pets as they are low maintenance and are fun to play with.

Hamsters bite when they are scared and when their sleep is interrupted.

How long do hamsters live?

The lifespan of hamsters is about one to two years but in captivity, they can survive up to three years.

How big do hamsters get?

The dwarf hamster, much like their name, is a very tiny rodent. They are about 2 to 4 inches long.

Meanwhile, the Syrian hamster which is also known as the teddy bear hamster or golden hamster usually grows to about 6 inches (15.24 cm) long.
A hamster, on average, weighs around 6.2 oz.

What are some of the types of hamsters?

Some types of hamsters are dwarf hamster, Syrian hamster or the teddy bear hamster, and the golden hamster.

What is the lower classification of hamsters?

The lower classification of the hamsters includes the subphylum which is Vertebrata. Meanwhile, the superfamily is Muroidea.

What are some of the popular names for hamsters?

Some popular names for hamsters are Cheeks, Chomper, Chewy, Harry, and Fuzzy.

What Kingdom do Hamsters belong to?

Hamsters belong to the Kingdom Animalia.

What phylum do Hamsters belong to?

What class do Hamsters belong to?

Hamsters belong to the class Mammalia.

What family do Hamsters belong to?

Hamsters belong to the family Cricetidae.

What order to Hamsters belong to?

What type of covering do Hamsters have?

Hamsters are covered in Fur.

In what type of habitat do Hamsters live?

What are some predators of Hamsters?

Predators of Hamsters include owls, hawks, and snakes.

What do Hamsters eat?

What is the average litter size for a Hamster?

The average litter size for a Hamster is 8.

What is an interesting fact about Hamsters?

Hamsters are able to run as quickly backwards as forwards!

How fast is a Hamster?

A Hamster can travel at speeds of up to 4 miles per hour.