The horned lizards are able to squirt blood from their eyes.

Click through all of our Horned Lizard images in the gallery. 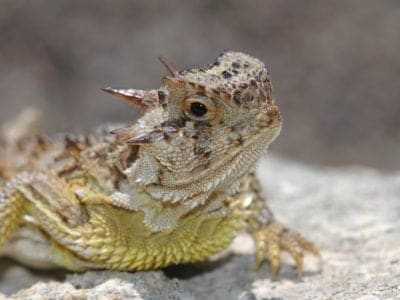 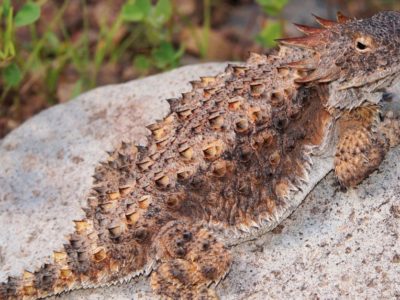 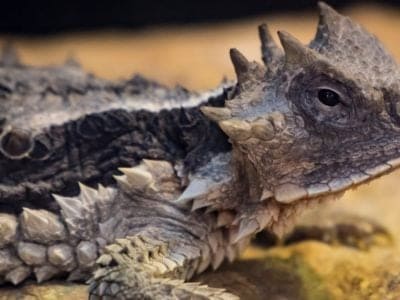 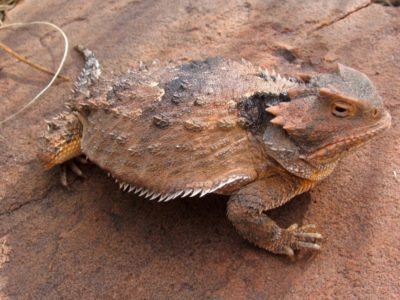 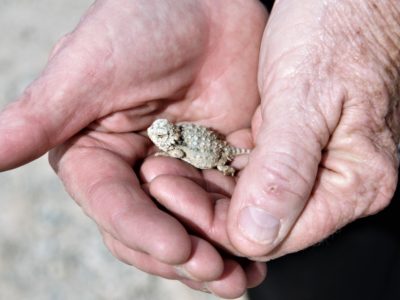 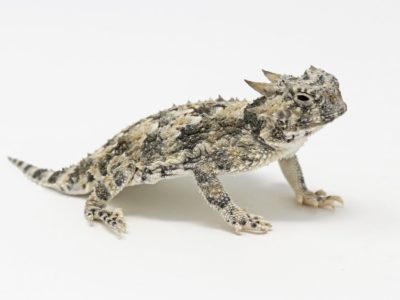 View all of the Horned Lizard images!

Horned lizards, as the name suggests, have a lot of horns all over their bodies. They also have several horns or spikes that sit on the crown of their heads, which is one of their many adaptations for survival.

Here are a few interesting facts about these lizards:

These lizards go by the scientific name Phrynosoma. Their family is called Phrynosomatidae while their order is called scaled reptiles.

The literal translation of “Phrynosoma” is “toad-bodied,” referring to their wide midsection.

There are 14 different types of these lizards including the Texas horned lizards, short-horned lizards, desert -, coast -, regal -, and mountain horned lizards – and while each would have its own specific features, the one thing that remains common in all of them are the horns. These lizards, as the name suggests, are covered in horn-like scales. The largest of the horns usually rest on their heads. While two of them are on their brows, many protrude from their jawline and go up to the skull’s temporal portion.

Two rows of the horns or spikes run along the lateral portions of their torso and separate the larger spikes on their dorsal side from their scaly underbelly. The snout-vent length of the Texas horned lizards, for instance, measures about 69 mm after they reach sexual maturity, which is around 13 months old.

These lizards are solitary creatures and are normally active between 60 to 80 degrees Fahrenheit, which is why they thrive in so many environments across North American and Central America. During summers or otherwise hot days, they are mostly active during the morning hours and become less active during the afternoon. They usually prefer soft, sandy soils near the rocks. This usually allows them to smoothly blend in with the background.

The Texas horned lizards, for, example, can be found lying in open grounds during mornings and evenings. They tend to bask in the sun while hunting for insects. In the hot afternoons, these lizards tend to slide under rocks for shelter. Some of these lizards are also known to go into hibernation from October till late March.

Soon after these lizards come out of hibernation, the mating season takes place. The male lizards call the female lizards by bobbing their heads and signaling for mating.

These lizards are found in the Sonoran Desert region. They are found throughout the area from near sea level up to 11,300 feet or 3340 meters. Some of the species of these lizards like the round-tailed lizard and the Texas horned lizards occur in several US and Mexican states.

Meanwhile, the flat-tailed horned lizard is restricted to Southwestern Arizona, Southeastern California, and a small part of northeastern Baja California. They are also found in the upper neck of the northwestern Sonora region in Mexico, though they can live as far south as Guatemala.

Reports suggest that most of these lizards live in semi-arid environments and deserts where they can often be seen basking in the sun during summer days. These lizards can be found in diverse habitats. Some of them are found in areas of fine sand while the others are found in dense forest areas.

While what the specific types of lizards eat can vary, most of them usually feed on various types of ants as well as insects. The short-horned lizard, for example, mainly feeds on harvester ants.

Apart from that, they also eat beetles and spiders, but they will feed on small pebbles occasionally. To trap their unsuspecting prey, the Texas Horned lizards lie motionless while ants cross them. They leap in and capture them as soon as they pass through them.

The neonates, however, eat mostly ants. And the yearlings like beetles while the adult horned lizards feed on both beetles as well as ants.

These lizards face threats from a lot of animals including dogs, wolves, hawks, snakes, and roadrunners. However, predators are not the only thing that poses a threat to these lizards. They usually eat ants that make up most of their diet. Therefore, the pesticides that affect ants also end up affecting these lizards.

Other threats to these lizards include the invasive red ants, illegal pet trade activities as well as climate change, and drought conditions that could impact the lifestyle and habitat ranges of these lizards.

Different types of lizards mate in different ways. In the Texas horned lizards, the mating usually happens in April and May, and the eggs are laid in May or June. In these lizards, the female digs a slanting tunnel that is about six inches long. She lays about 27 eggs and places them in three horizontal layers. The layers are separated by firm layers of sand. The eggs are cream in color. They are also very tough and leathery. They hatch in about 40 days.

The round-tailed lizards, however, carry on the process in a much different way. While they also lay eggs, they are known to retain the eggs inside their bodies until the baby lizards are developed. Their eggs are membranous, and the babies break through as soon as the eggs are deposited.

The short-horned lizards, however, are the only type that gives birth to the living baby lizards and not lay eggs just like the several different types of horned lizards. The eggs are retained with the mother until the baby lizards break through, which are ultimately born from the mother.

While little information is available about the lifespan of these lizards, they are known to live at least five years. The males are known to call and attract the female lizards by bobbing their heads and signaling for mating during the mating season.

While the exact population of these lizards is not known, there are 14 different types of these lizards that exist around the world. However, their population is known to be declining because their diet majorly includes ants, and the pesticides that kill the ants also tend to affect them. Apart from that, human activities like urbanization and pet trading have also affected the populations of these lizards.

Is the horned lizard a carnivore, herbivore, or omnivore?

These lizards are mostly omnivorous. They usually eat only ants. Some of the types tend to feed on beetles, spiders as well as insects. Some others also feed on pebbles.

The horned lizards are harmless to human beings. However, their spikes could be hurtful.

Can you have a horned lizard as a pet?

These lizards do tend to respond well to captivity and do make great pets.

Why do horned lizards squirt blood from their eyes?

Horned lizards squirt blood from their eyes to protect themselves from predators and other threats.

What do horned lizards eat?

These lizards are mostly omnivorous. They usually eat only ants. Some of the types tend to feed on beetles, spiders as well as insects. Some others also feed on pebbles.

Where do horned lizards live?

How does a horned lizard protect itself?