Horseflies have been seen performing Immelmann turns, much like fighter jets.

Colour
Top Speed
90 mph
Lifespan
30 to 60 days as an adult
Weight
12 milligrams
Length
Between 0.2 and 1.25 inches
Age of Sexual Maturity
Immediately after pupating

Click through all of our Horsefly images in the gallery. 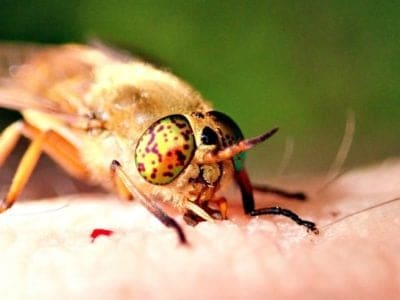 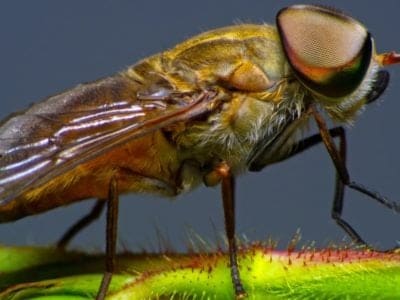 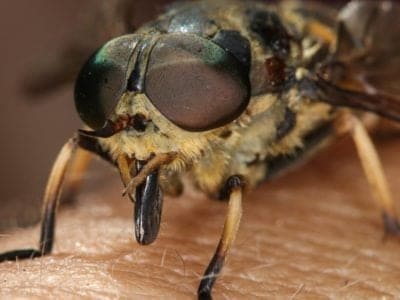 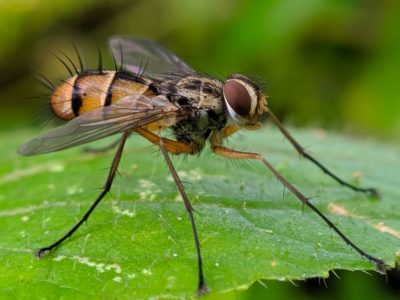 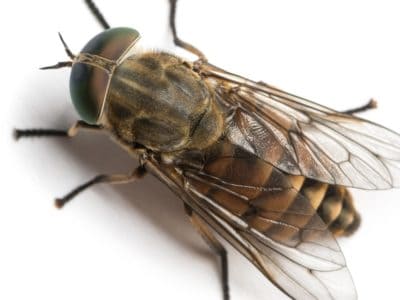 View all of the Horsefly images!

When a mosquito bites a person, they sometimes don’t notice until they start to itch. There’s no such subtlety in the bite of the horsefly.

Her mouthparts are rather like a Swiss Army knife, and she seems to use all the parts at once to get to the blood meal she needs. Like the male mosquito, the male horsefly doesn’t have biting mouthparts and is pleased to sip nectar and other plant liquids. Though the horsefly, like the mosquito, is one of those insect pests ripe for extermination, the extermination of such an abundant and tenacious species does not seem feasible at the moment.

Horseflies belong to the Tabanus genus, and there are over 1300 species and hundreds of subspecies. Tabanus was used by the ancient Roman scholar Pliny the Younger as a name for the animal and is now the name for the genus. T. americanus is the American horsefly. It is, as its specific epithet suggests, found in the United States and Canada, from Kansas to New Hampshire and from Florida to Texas. It is also found in Ontario.

It is between 0.87 and 1.06 inches long and is the largest of the tabanids. T. atratus is also found in the continental U.S. Also known as the black horsefly, its epithet comes from the Latin word for dull black.

Horseflies are what are called “true flies.” That means they only have one pair of wings and have balancing halteres right behind the base of their wings. Halteres are a reason that horseflies can be rather acrobatic in flight.

Horseflies are big and have huge compound eyes that can be brightly colored or show iridescence when viewed in certain light. Males can be told from females in that their eyes nearly touch while the eyes of females are separated. The end of their antenna is ringed and hairless. There are hairs on the fly’s head and its thorax, which is the middle part of its body, and the wings are clear or either a cloudy gray or brown. Their legs have claws that let them hold on to their prey. Different species can be told apart through small differences in their heads, the pattern of veins in their wings, and color patterns on their bodies.

The mouthparts of the females are made up of a pair of mandibles and a pair of maxillae that have serrated cutting stylets that rip open skin and break the blood vessels beneath it. The spongelike tongue then laps up the blood, which has been injected with an anticoagulant so it won’t clot.

Horsefly babies or maggots, are long and tapered at the head end, and the head can be retracted. The body has bands of bristles and 12 segments with tubercles. They are from 10 to 30 millimeters long and found in wet or moist places. They go through six to 13 larval stages, and if they hatched late in the season, they can overwinter and pupate the next spring. The pupa is also 10 to 30 millimeters long and is brown and shiny. Eventually, the outline of the adult fly can be seen through its casing.

Both horseflies and deerflies belong to the Tabanidae family, and they both bite humans. Indeed, deerflies are more likely to bite humans than horseflies. But there are some interesting differences between them.

The wings of the horsefly are transparent or cloudy, while the deerfly’s wings are clear but have dark patches or bands. Deerflies only bite animals that are moving, while horseflies will bite whether the animal is moving or not. A person can also hear a deerfly coming, while the horsefly is sometimes much stealthier.

Most horseflies don’t fly very far away from where they were born, though some can fly over 40 miles away. When they rest they can be found in the middle of the road, on a path, or in low-hanging foliage. Since the insects are diurnal, they don’t bite at night, and they bite less on cloudy, cool, and windy days. They are attracted to lights such as porch lights and can sometimes gather in groups to fly around them.

One good thing about horseflies is that they don’t enter houses, barns or other buildings to get a meal.

Most horseflies aim for the prey’s legs, ankles, or the backs of their knees, though deerflies prefer the nape of the neck, the head, and the shoulders. Some scientists believe that the fine stripes on a zebra’s lower legs evolved to confuse horseflies.

Horseflies are found in most habitats around the world save those that have extremes of temperature or habitats that are dry. It does need to lay its eggs near bodies of water or in environments that are moist, and it needs a habitat that has enough animals to provide protein for the female.

When the female isn’t lapping blood, she and the male drink nectar and other plant juices. There are some horseflies that are actually useful as pollinators. But for the female to reproduce, she needs a blood meal.

The female horsefly is much like a female mosquito in her search for prey. She is drawn by dark fur or clothes, the carbon dioxide the prey exhales, and the temperature and texture of their body. Most horseflies choose large mammals, but they are not above preying on rodents, other small mammals, and even cold-blooded animals such as lizards. They will even take a meal from a recently dead animal. When the horsefly has picked out potential prey, she will pursue them unremittingly. If she’s swatted away, she will at least try to return so she can get a full meal. If she’s deterred, she’ll go from prey to prey, and this is how she can spread diseases.

Horseflies often work alone, but others attack in groups. An invasion of horseflies is especially dangerous.

Horsefly maggots are also aggressive predators. They are found in wet soil and bodies of fresh and salt water, and they eat other insect larvae and tadpoles. If they are small enough, they will eat frogs and toads. Not only this, but the larvae seem to be venomous, as prey is subdued after it’s bitten.

The eggs of horseflies are used by parasitic wasps to incubate their own eggs. Maggots are attacked by tachinid flies and tiny worms called nematodes. They also succumb to fungi and are eaten by birds and other carnivores. Grown horseflies are also eaten by birds. As menacing as it is, the soft-bodied, stingless horsefly has no natural defenses against creatures that wish to eat it. A wasp called the horse guard wasp uses horseflies to feed her own offspring. She paralyzes the fly and brings it back to the nest where it will be eaten alive by her larvae.

What Eats the Horsefly?

Horsefly are eaten by birds, wasp larvae and other predators that eat flies.

What Does the Horsefly Eat?

Horseflies begin to reproduce soon after they emerge from their pupae. What seems like an invasion of male horseflies may fly to hilltops and woods to look for females. When one passes, a male chases her. If she accepts him, they’ll mate for half an hour, then feed. This only happens when the weather is warm and fair. Some female horseflies only mate once in their life.

After the business of getting a blood meal, the female lays her eggs on the underside of leaves or rocks near bodies of water while the male, resting on vegetation nearby, watches. She can lay between 100 and 1000 eggs at a time. The eggs hatch after six days, and the maggots use a special spike to open up the egg. Then, they drop into the water or the wet soil. When it’s time to pupate, they leave the water for dry land. After two weeks, the case splits open, and the fly pulls itself out. The first horseflies to emerge are usually male.

The entire life cycle of a horsefly maggot can last for as long as three years as it undergoes molts and pupation. However, the adult horsefly only lives for about a month or two.

Given there are over a thousand species and subspecies of horsefly, it is safe to say that they are abundant and in no danger of extinction. Attempts at extermination are futile. Indeed, humans have tried for millennia to control horseflies, and success is limited. Insecticides simply can’t be used where horseflies and their larvae live because insecticides damage the environment. Even treatment with insect repellents that deter mosquitoes doesn’t work as well against a determined horsefly. People can release parasitic wasps into areas where the horseflies are found or use a trap such as a malaise trap that uses carbon dioxide or a Manitoba trap.

Why are horseflies so aggressive?

Female horseflies are aggressive because they need the protein from a blood meal in order to lay eggs, and they are intent on getting it.

What happens when a horse fly bites you?

When a horsefly bites she uses her cutting stylets to tear into your flesh and enlarge the resulting wound. When the wound bleeds she laps up the blood with her tongue, which is like a sponge. This is called telmophagy.

Treatment for a horsefly bite is similar to treatment for a mosquito bite. Wash the wound, apply a cold compress, and take care not to scratch it.

Why do horsefly bites hurt so much?

Unlike mosquitoes, horsefly mouthparts aren’t made to slide into the skin like a hypodermic needle but to slash at it like knives. Also unlike a mosquito, the female horsefly doesn’t trouble to add an anesthetic so that you don’t feel it.

Horseflies don’t bite the way a dog or a cat bites with the combined action of their jaws and teeth because their mouthparts are made differently.

Are horseflies carnivores, herbivores, or omnivores?