There are four different species!

Hyenas are animals that are biologically closer to cats than dogs.

Humans tend to make snap judgments about these animals. We think of them as savage gluttons with demonic laughs. But it’s an unfair characterization. In reality, they are sociable and smart. Plus, they play a vital role in the African, Middle Eastern, and Asian ecosystems. Hyenas rival lions in terms of predatory prowess and the spotted hyena’s community structure will make you shout, “no way!” So, let’s abandon our assumptions and dive into the wild and wondrous world of these animals.

The scientific name for hyena is Hyaenidae, which doubles as the animal’s taxonomic family that includes four extant species dispersed over three genera.

The scientific name for aardwolves — which means “earth-wolves” in the Afrikaans and Dutch languages — is Proteles cristata. Proteles is a portmanteau of two ancient Greek words, teleos and protos, which roughly translate to “complete” and “front or first,” respectively. Combined, they mean “complete in front,” a reference to the aardwolf’s five-toed front feet.

Cristata derives from the Latin word “cristatus,” which means “provided with a comb,” a reference to the animal’s mane.

Other names for aardwolf include “maanhaar-jackal,” “any hyena,” “termite-eating hyena,” and “civet hyena.” The Nama people use “|gīb” to label the animal.

Hyaena brunnea is the scientific name for the brown hyena. Hyaena derives from the ancient Greek word “hyaina,” which evolved from “hys,” meaning hog or pig. Under the Roman pen, hyaina became hyaena, and when Middle English emerged as the prominent language, hyaena morphed into hyena.

Brunnea comes from the Latin word “brunneus,” which means “brown.”

The scientific name for the spotted hyena is Crocuta crocuta. For decades, people thought “crocuta” came from the Latin word “crocutus,” which means “saffron-colored one,” but they were wrong. The taxonomic label for spotted hyenas comes from the ancient Greek word “Κροκόττας,” which translates to “golden jackal.”

Hyaena hyaena is the scientific name for striped hyenas. As we discussed under the brown hyena section, Hyaena derives from the ancient word “hyaina,” which relates to wild pigs. The Greeks associated the two animals because they both had manes.

These animals belong to the carnivorous suborder Feliformia — sometimes called Feloidea — which includes meat-eating mammals with “cat-like” physical and behavioral features. Currently, there are four species of these animals scavenging throughout large swaths of Africa, the Middle East, and Eurasia.

Generally speaking, hyenas are four-legged animals with scraggly fur and large ears. Interestingly, they have both feline and canine features, and all sport manes. They also have downward sloping spines, long front legs, and short hind legs. Learn about the ugliest animals on earth here.

Aardwolves, brown -, and striped hyenas have lined coats. The spotted hyena, as its name suggests, sports dotted pelage. Like dogs, their short claws are non-retractable, but they have more ribs than canids and rough tongues similar to felines.

Male individuals in the aardwolf, striped, and spotted hyena species are usually larger than their female counterparts. In the spotted variety community, however, the women are bigger. They dominant the males and even have external genitalia.

How Big Are Hyenas?

Hyenas vary in size depending on the species and sex.

The striped variety typically lives alone or in pairs, though some populations travel in packs up to seven-deep. Spotted hyenas are the exception. Exceptionally sociable, they live in highly organized communities of up to 80 individuals. Matriarchal and monarchical by nature, females of the species dominate. Plus, when a pack leader dies, her oldest daughter automatically takes over!

Mostly they burrow in caves and under crevices. Striped hyenas also dig dens.

The animals vocalize loudly and frequently. However, not all species laugh, as is often assumed. In fact, spotted hyenas are the only extant species known for laughing. Notably, they use about a dozen distinct grunts, laughs, and barks to communicate with their clan members about food and migration efficiently.

Aardwolves live in bushlands and heavily grazed arid plains where termites — an essential part of their diet — are plentiful. Typically, aardwolves stay in the same place for about six weeks and cluster their dens together.

These animals are primarily scavengers, but they also kill prey. As carnivores, they mostly consume meat but have been known to supplement their diets with fruit in tough times. They are also members of the “clean plate club,” meaning they eat every last bit of a kill, including bones and hooves. Plus, they aren’t particularly picky about what type of meat they eat.

These animals have digestive systems made of steel! So much so that field scientists and anthropologists often report of them feasting on inanimate objects, like tires and tent materials.

Aardwolves’ primary source of nourishment is termites from the genus Trinervitermes. Using sound and scent clues, aardwolves locate the crawlers and lick them off the ground using their sticky tongues. In a single night, an individual aardwolf may consume upwards of 250,000 insects. Conscious of their constant need for sustenance, aardwolves never eat an entire pile of termites. Instead, they leave it partly intact, and the mound serves as a replenishing source.

The aardwolf diet differs from other hyena species because it doesn’t include any carrion, which is the meat of an already killed animal. Instead, aardwolves stick to insects and larva.

These animals aren’t great hunters. As such, they rely on carcasses killed by other predators. They also supplement their meals with rodents, insects, eggs, fruit, and fungi.

Spotted hyenas, arguably the most aggressive Hyaenidae species, differ from their cousins because they primarily hunt prey instead of sticking to carrion. Except for spotted populations in west Africa, who largely scavenge for meat, the species preys on large, hooved, plant-eating animals, including, but not limited to, wildebeests, giraffes, gazelles, impalas, gemsboks, sheep, goats, and cattle. They’ve also been known to catch fish, and, on rare occasions, humans!

These animals have huge appetites. A single individual can pack away up to 32 pounds of meat in a single feeding!

These animals are scavengers who eat almost any meat, though they turn their noses up at vulture flesh. They also feast liberally on bones and bone marrow.

Lions are These animals’ primary foe even though the former usually don’t eat the latter. But lions see them as fellow apex predators and will kill them to reduce competition. Similarly, in the Middle East, striped hyenas compete with wolves for food. But at times, the two animals cooperate and travel in joint-species hunting packs.

Leopards also prey on these animals in certain regions.

According to conservationists, aardwolf and spotted hyenas currently enjoy stable wild populations and don’t face imminent extinction. Striped and brown varieties aren’t as fortunate because humans are increasingly encroaching on their natural habitats and killing them at alarming rates using traps, poison, and wire snares. Farmers often eliminate brown hyenas in retaliation for livestock deaths. In reality, though, they don’t kill prey; they only scavenge for dead animals, which sometimes includes already deceased livestock.

Spotted, brown, and aardwolf hyenas copulate with several partners in a lifetime. Striped hyenas, on the other hand, are monogamous, meaning they mate with the same partner for most of their lives.

For the spotted variety, mating is an awkward and tricky process since both the male and female have genitalia on the outside of their bodies. The male has to position himself just right in order to successfully mate with the female. This process often is described as a dance because of all the jumping around he has to do.

The babies are called cubs. At birth, aardwolves, brown, and striped hyenas are born with closed eyes and require adult help. Spotted hyenas, however, are born fully developed, with open eyes and teeth!

These animals usually live for about 12 years, but they can live up to 25 years. Brown hyenas, however, typically have shorter lives.

The oldest specimen ever was a male spotted hyena named Mars who lived in the Honolulu Zoo with his brother, Whoops. Both arrived in 1992, and both had unusually long lives. Mars broke the record with 28.5 years, and Whoops made it to 26!

According to the International Union for the Conservation of Nature, aardwolves and spotted hyenas are populations of least concern, meaning they’re currently not in danger of extinction. However, brown and striped hyenas are classified as near threatened, and scientists are employing conservation efforts to combat declining population numbers.

Click through all of our Hyena images in the gallery. 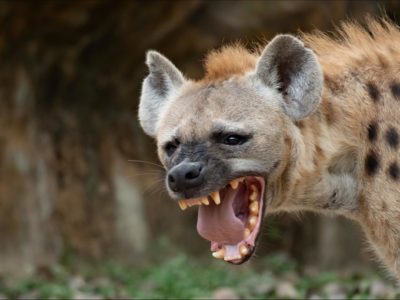 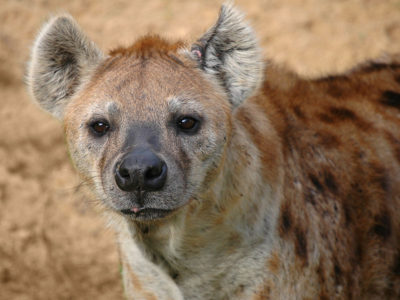 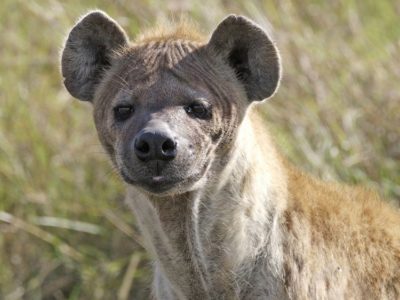 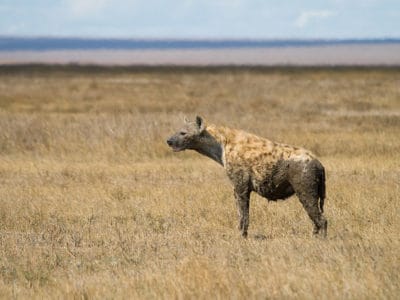 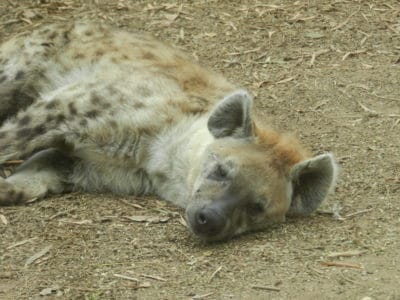 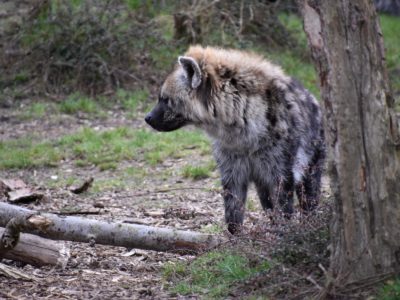 View all of the Hyena images!

Are Hyenas Carnivores, Herbivores, or Omnivores?

Hyenas are primarily carnivores that subsist on meat and bones. However, aardwolves stick to termites and larva, and several hyena species will supplement their diets with fruit to get through lean times.

What is a Hyena?

A hyena is a four-legged, carnivorous mammal that has both dog-like and cat-like features. However, biologically, hyenas are more closely related to felines than canines. Hyenas live in Africa, the Middle East, and Asia and play an essential role in the areas’ ecosystems.

Are Hyenas Dogs or Cats?

Hyenas are neither dogs nor cats, but they are Feliformias, meaning they have cat-like anatomical qualities. And while hyenas share characteristics with canines, they are in no way considered dogs, scientifically speaking.

Yes, hyenas can be incredibly aggressive, especially the spotted species. spotted and spotted hyenas have been known to attack humans. Brown hyenas and aardwolves are considerably less bloodthirsty.

Can a Hyena Kill a Lion?

Yes, hyenas can kill lions! In the 1990s, a massive war between hyenas and lions broke out in Ethiopia for several weeks. During the conflict, hyenas managed to take down six lions. In the end, the military had to intervene and quell the conflict.

Instinctively, people think of hyenas as unfortunate looking. But closeup photos reveal adorable faces. However, hyenas’ pelage is not fluffy and full. As such, they usually appear scraggly and unkempt.

How Much Does a Hyena Weigh?

Depending on species, hyenas can weigh anywhere between 15 and 155 pounds. Aardwolves weigh the least and spotted hyenas the most.

What Kingdom do Hyenas belong to?

Hyenas belong to the Kingdom Animalia.

What phylum do Hyenas belong to?

Hyenas belong to the phylum Chordata.

What class do Hyenas belong to?

Hyenas belong to the class Mammalia.

What family do Hyenas belong to?

Hyenas belong to the family Hyaenidae.

What order do Hyenas belong to?

Hyenas belong to the order Carnivora.

What genus do Hyenas belong to?

Hyenas belong to the genus Crocuta.

What type of covering do Hyenas have?

Hyenas are covered in Fur.

In what type of habitat do Hyenas live?

What is the main prey for Hyenas?

What are some predators of Hyenas?

Predators of Hyenas include lions, leopards, and crocodiles.

What is the average litter size for a Hyena?

The average litter size for a Hyena is 3.

What is an interesting fact about Hyenas?

There are four different species of Hyena!

What is the scientific name for the Hyena?

The scientific name for the Hyena is Crocuta Crocuta.

What is the lifespan of a Hyena?

How fast is a Hyena?

A Hyena can travel at speeds of up to 37 miles per hour.