They are the longest poisonous snake in the world.

Click through all of our King Cobra images in the gallery. 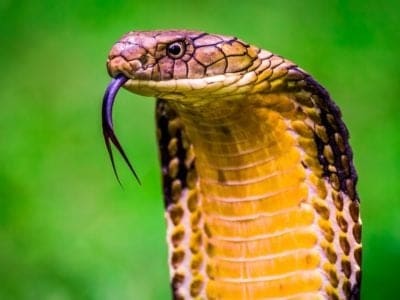 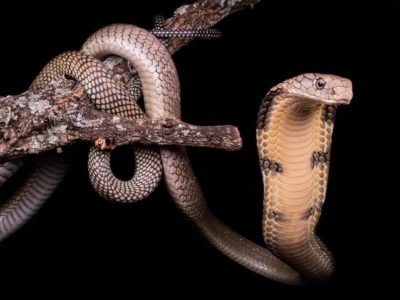 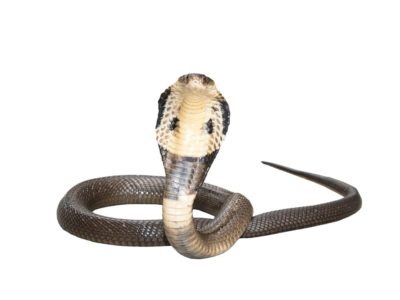 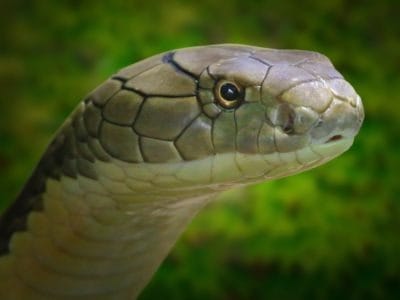 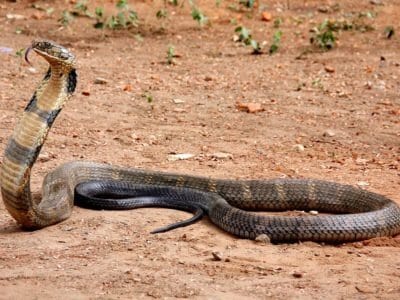 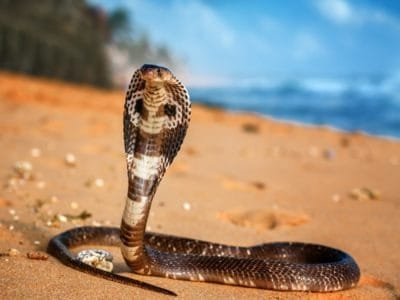 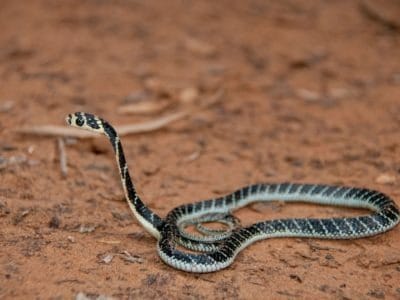 View all of the King Cobra images!

Most king cobras measure from 12 to 18 feet long. They live in southern China, India, and southeastern Asia. Their habitat includes streams, forests, bamboo thickets and swamps. This snake is a carnivore eating other snakes, birds, and lizards. King cobras live about 20 years in the wild.

A king cobra’s scientific name is Ophiophagus hannah. The Greek word Ophiophagus means snake eating and Hannah is a reference to a Greek myth about tree-dwelling fairies. The king cobra eats other snakes and lives a lot of its life in trees. It sometimes goes by the name hamadryad. It belongs to the elapidae family and is in the Reptilia class.

A few of the 20 subspecies of this snake include the forest cobra, the Ashe’s spitting cobra, the Mozambique cobra, and the Indian cobra.

A king cobra is an animal with a smooth body that is covered in yellow, brown, green, and black scales. It has a chevron pattern of color running down the back of its neck. Some king cobras are leucistic. A leucistic king cobra is missing some most of its coloration and looks white. It’s not an albino because it has blue eyes as opposed to pink ones. A leucistic king cobra has all the qualities of a king cobra with the exception of its black, green, brown, and yellow scales.

King cobras are animals that have two dark eyes and fangs that are a half inch long. A half inch may sound very short for a snake’s fangs. But, they have to be short, so they won’t press through its lower jaw when it closes its mouth.

This snake can measure 12 to 18 feet long. As an example, an 18-foot-long king cobra is equal in length to 2/3 of a London bus! Compare this to the forest cobra that grows to be just 10 feet long. No wonder the king cobra is known as the longest venomous snake in the world.

The king cobra weighs between 11 and 20lbs. A 20lb king cobra is equal in weight to two gallons of paint. The heaviest king cobra lived in the New York Zoological Park and weighed just under 28lbs. Male king cobras grow to be a little bigger than females.

Though this snake has a reputation for being aggressive, it actually has a shy nature. It would rather steer clear of people and other animals, if possible. It’s considered a solitary reptile. However, when they are seen together during breeding season the group is called a quiver.

This reptile’s dark brown, green, and black scales allow it to blend in with its environment. However, when it feels threatened by an animal or human, it will expand its hood and raise the top half of its body off the ground. This is so it can move freely and meet the eye of whatever is threatening it. Also, this snake shows its fangs and hisses at the threat. Some people say that a king cobra’s hiss sounds a lot like a dog’s growl.

The defensive stance of a king cobra is a big part of the reason why they are considered to be aggressive reptiles. It’s enough to scare smaller animals away! However, these reptiles are simply defending themselves from threats.

The venom of a king cobra is not particularly strong. But the amount of venom it can inject in a person or animal in one bite is enough to kill an elephant or 20 people. The venom causes respiratory distress and cardiac failure. This would definitely qualify as a defensive feature of this snake!

They spend most of their time in trees blending into the dense, leaf-filled branches. They sometimes hang down from a tree branch to capture another snake. Other times king cobras come down from the trees to hunt for prey on the forest floor. They may travel to nearby streams to look for food. These reptiles can swim fairly well and have been seen moving along through the water.

When the weather cools off in late fall and winter, king cobras migrate to dens to stay warm. They come back out in the springtime.

What do king cobras eat? King cobras are carnivores eating birds, lizards, and other snakes. When those are scarce, these snakes will eat small rodents. If a king cobra eats a large amount of prey at one time, it may not eat again for a few months.

This snake has excellent eyesight. It can sometimes spot prey while resting on a high branch in a tree. Like other snakes, it also has an impressive sense of smell.

King cobras are fast and move quickly to strike their prey without having to hold it in place like other cobras.

Humans are the only predators of the king cobra. Poachers sometimes set traps for these snakes and kill them for their skin, to make medicine or even to eat. Some of these reptiles are sold illegally as exotic pets.

Since these reptiles need a certain type of environment to thrive and they have a venom that is capable of killing a human, it’s definitely not a good idea for anyone to keep one as a pet.

In southeast Asia, snake charmers sometimes use king cobras in their street performances. They pretend like the king cobra is charmed by the music they’re playing on the flute. These snakes have been known to bite snake charmers as well as escape into an environment where they can’t survive.

Habitat loss due to deforestation and land clearing is another threat to king cobras.

The official conservation status of king cobras is Vulnerable with a decreasing population. Though they are on the endangered list of species in India, this country is taking steps to protect them. They are focusing on properly educating the public about these reptiles. Plus, they are also microchipping king cobras so they can track them if they are captured by exotic pet dealers. Vietnam has given these snakes a protected species status.

The female creates a nest by pushing twigs, grass, and other vegetation into a pile. The temperature within the pile/nest is around 80 degrees Fahrenheit. Shortly after, she lays 21 to 40 (sometimes more) eggs in the nest. The eggs hatch between 51 and 79 days later. As a note, the king cobra is the only snake that builds a nest for its eggs. The female stays with the nest and fiercely guards her eggs from predators until they hatch. Consequently, most of the king cobra eggs will hatch and the babies will survive.

Baby king cobras are called hatchlings. Each hatchling can weigh from less than an ounce to one and a half ounces. The hatchlings usually measure from 12 to 29 inches long. A 12-inch-long hatchling is equal to the size of a small wooden ruler.

The hatchlings are brightly colored. This helps to scare off predators. As they grow, their scales turn dark brown, black, and green. They leave the nest to hunt prey and live independently right after hatching. The venom of a hatchling is every bit as powerful as an adult king cobra. Keep that in mind in case you ever see one!

These reptiles are vulnerable to various types of skin fungus. The lifespan of a king cobra in the wild is around 20 years. But the oldest king cobra record is held by a snake that reached 22 years of age!

The exact population of king cobras is unknown. However, the conservation status of the king cobra is Vulnerable. Its population is decreasing. Loss of habitat and poaching activity are two major threats to the population of this snake. It’s on the endangered species list in India.

View all 24 animals that start with K

How long is a king cobra?

King cobras can be 12 to 18 feet long. Males are usually a little bit bigger than females.

King Cobra vs Cobra: Who wins the fight?

King cobras eat other snakes including cobras, so the king cobra would win in a struggle with practically any other type of cobra.

How deadly is a king cobra?

The venom of a king cobra is not particularly strong, but this snake releases a large amount of it. A venomous bite (as opposed to a dry bite with no venom) can kill an elephant or 20 humans. As a note, a dry bite is also dangerous because this snake’s fangs are so sharp they could cause serious injury.

Can you survive a king cobra bite?

Yes. There’s an antivenin that can counteract the venom of a king cobra. The venom of this snake can kill in 30 to 45 minutes from the time of the bite. So, it’s important to get the person to a medical professional as soon as possible.

What is the difference between a cobra and a king cobra?

It may seem like the king cobra and other cobras should be lumped into the same group. But there are some differences. For one, the king cobra belongs to its own genus. A king cobra’s genus is known as Ophiophagus while the Chinese cobra, forest cobra, and many others are categorized under the genus Naja.

Another difference is the king cobra’s head is larger than that of other cobras and its hood is more narrow. They also have two especially large scales on the back of their head that other cobras don’t have. These special scales are called occipitals.

Many cobras are venomous. The spitting cobra lives up to its name by spitting venom at anything threatening it. Egyptian cobras are venomous as well releasing a poison that targets a predator’s nervous system. However, the king cobra claims the title as the longest venomous snake in the group.

King Cobras are Carnivores, meaning they eat other animals.

What Kingdom do King Cobras belong to?

How do King Cobras have babies?