When a female Nile crocodile’s hatchlings are in danger, she may hide them in a special pouch inside her throat.

Click through all of our Nile Crocodile images in the gallery. 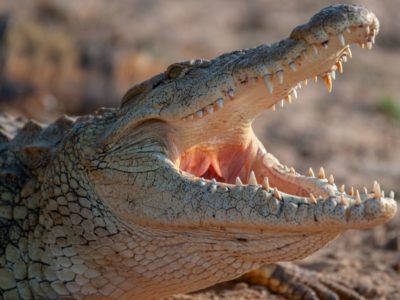 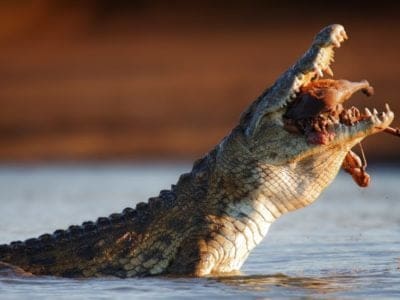 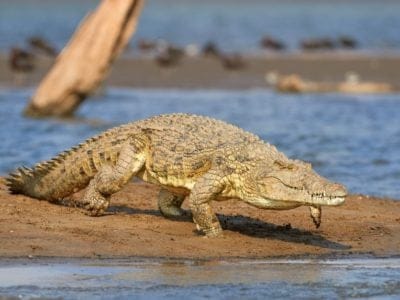 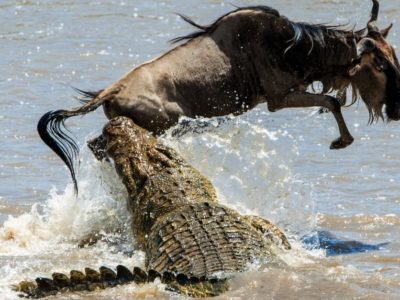 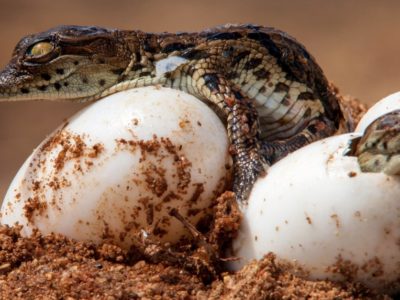 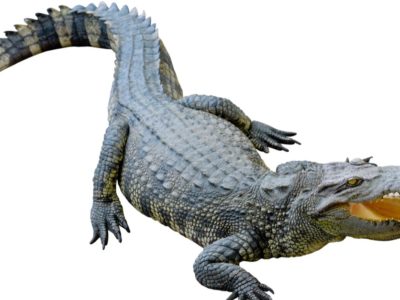 View all of the Nile Crocodile images!

An adult Nile crocodile can be as long as 20 feet! They are carnivores that can subdue and eat large mammals. This crocodile lives in various places throughout sub-Saharan Africa as well as in the Nile basin and western Madagascar. These reptiles communicate with one another by hissing and growling. They can live to be at least 45 years old in the wild.

The scientific name of this crocodile is Crocodylus niloticus. Crocodylus comes from the Greek word meaning lizard and niloticus means from the Nile River. It belongs to the Crocodylidae family and the class Reptilia.

A Nile crocodile looks a lot like a giant lizard. Its body is covered in tough scales that are grayish-brown or olive in color. In addition, this reptile has crossbands of dark scales covering its powerful tail. The Nile crocodile has four short legs along with clawed feet. Their back feet are webbed making them excellent swimmers. They have green eyes with vertical pupils specially designed to help them see in their watery environment at night.

One of the most fearsome things about the Nile crocodile is its size. They grow to an average length of 16 feet but can measure as long as 20 feet. They weigh from 500 pounds to 1,650 pounds! As a comparison, from its nose to the tip of its tail a 20-foot crocodile is the same length as three-fourths of a London bus! A 1,650-pound Nile crocodile is equal in weight to half of an average car. No wonder these reptiles are so confident when attacking large prey!

A Nile crocodile named Gustave is the largest one on record at over 20 feet long.

Nile crocodiles are also known for their ability to burrow. They use their clawed feet to burrow so they can go underground if the weather becomes too cold or hot for them to survive. Some of these burrows are 12 feet deep while others are close to 40 feet deep. These reptiles retreat into their burrow and go into a state similar to hibernation called aestivation. During aestivation, a crocodile’s heart beats just twice a minute!

This crocodile uses its teeth and tremendous bite force to grab onto its prey. Its bite force can be as strong as 5,000 Ibf. Lbf refers to the weight (lbs.) of the crocodile and the force of its bite. Think of it this way. The force, or strength of a Nile crocodile’s bite is five times more than the bite force of an adult lion.

One of the most interesting facts about this reptile is it can be both solitary and social. They may hunt alone or work with other Nile crocodiles to trap and eat a school of fish. Also, Nile crocodile parents work together to protect their eggs from predators. These crocodiles can sometimes coexist in the same territory.

A gathering of four or five crocodiles lying in the sun on shore is called a bask. Alternatively, a group of crocodiles swimming together is called a float.

Due to their size, these crocodiles are aggressive and have no hesitation in attacking large mammals and humans near the shoreline.

Not surprisingly, these two gigantic crocodiles have some things in common as well. For one, they both have a diet of fish along with birds and large mammals. Both types can live 45 plus years in the wild and even longer in captivity. Also, both crocodiles have a tremendously strong bite force.

These reptiles live in sub-Saharan Africa, the Nile basin and western Madagascar. Specifically, they live in freshwater swamps, mangrove swamps, rivers, estuaries, and large lakes. These cold-blooded reptiles live in a moderate climate and rely on the sun to keep them warm. They spend most of the day basking in the sun without moving. If a crocodile starts to get too hot in the sun, it opens its mouth to let excess heat pour out and evaporate. In the evening, they go back into the water to hunt and cool off. When the weather gets too cold for them to survive, these reptiles dig a burrow and go into aestivation underground.

Some Nile crocodiles migrate to different areas to find a larger food supply or to find a suitable place to make a nest.

Nile crocodiles are carnivores. They usually hunt in the evening and at night. This crocodile can consume a supply of food equal to half its body weight. So, a 1,000-pound Nile crocodile could eat a 500-pound zebra during a single meal.

What eats a Nile crocodile?

An adult Nile crocodile doesn’t have any natural predators. Humans are the only threat to them. However, baby Nile crocodiles fall victim to many predators including Nile monitor lizards, African fish eagles, snakes, and honey badgers.

One threat to this crocodile is habitat loss due to land development. In addition, they sometimes become entangled in commercial fishing nets and die. Poaching is another threat to these crocodiles. They are hunted for their meat and eggs.

What does a Nile crocodile eat?

Being the biggest crocodile in Africa means this reptile has a lot of prey to choose from. Nile crocodiles eat a variety of fish. They are also known for attacking large mammals such as zebras, buffalo, antelope, and even small hippos.

A Nile crocodile is able to remain very still watching a mammal such as a zebra or an antelope taking a drink from a river or lake. Though these crocodiles are large, they are also very fast. They dart up out of the water and clamp down on their prey using their tremendous bite force to hold and subdue it.

This crocodile has a conservation status of Least Concern with a stable population.

The mating period of this crocodile happens during the dry season. Male crocodiles try to attract females by splashing with their snouts, spraying water, and making growling sounds. Once the strongest male drives all the others away, the female and male mate. Most male crocodiles mate with many females during breeding season. But the male Nile crocodile stays with a female to guard their nest of eggs. That’s one of the most unusual facts about this crocodile. As a general rule, most reptiles lay their eggs and leave them.

The female digs a burrow about 20 inches deep to serve as a nest for her eggs. She lays 25 to 80 eggs in the burrow and pushes sand over them. The eggs are about 3 inches long and weigh a few ounces. The incubation period is around 90 days.

Baby crocodiles are called hatchlings. If a hatchling is having trouble breaking out of its egg, the female crocodile may put it in her mouth and roll it around to help with the hatching process. Once the eggs hatch, the female takes the hatchlings into her mouth and carries them to the water. Hatchlings can see, walk, and swim from birth. They stay with their mother for the first two months of life. During that time, the hatchlings learn to capture insects and small fish. Though the mother crocodile gives them protection, hatchlings are vulnerable to many predators.

The typical prey of these crocodiles increases in size as the crocodile grows. So, by the time this reptile reaches adulthood, it’s eating large mammals.

These crocodiles can live 45 years or more in the wild. These reptiles live even longer in captivity. Henry, a Nile crocodile living in South Africa, is believed to be the oldest at 120 years old!

Scientists estimate the population of these crocodiles at 50,000 to 70,000 mature individuals. Their conservation status is Least Concern with a stable population.

View all 20 animals that start with N

How dangerous is the Nile crocodile?

The Nile crocodile is very dangerous. Not only is it the biggest crocodile in Africa, it’s also a powerful, fast animal. It has a bite force that’s five times more powerful than a lion.

Yes, these powerful crocodiles have the ability to eat humans. In fact, an estimated 200 people are killed each year by Nile crocodiles.

Can a Nile crocodile kill a lion?

Nile crocodiles do have the potential to kill a lion. If a crocodile severely injures a lion and other crocodiles are around to subdue it, then a lion could be killed by a Nile croc.

What eats the Nile crocodile?

A human who hunts and kills an adult Nile crocodile may do so in order to eat its meat.

Nile crocodile hatchlings have a long list of predators. They are eaten by Nile monitor lizards, African fish eagles and snakes among other animals.

How big is a Nile crocodile?

An adult Nile crocodile is usually around 16 feet long, but they can grow to be 20 feet. These reptiles can weigh from 500 to 1,650 pounds.