Have lived in South America for millions of years

Click through all of our Piranha images in the gallery. 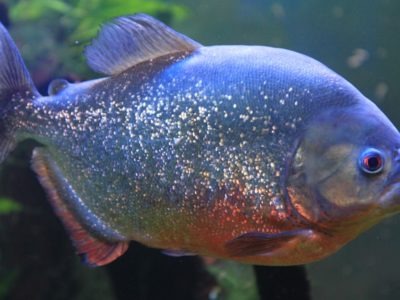 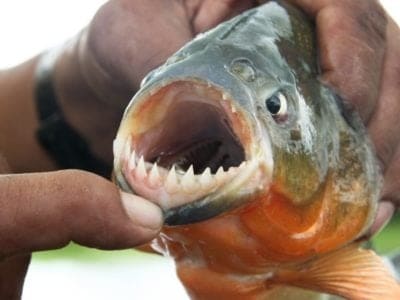 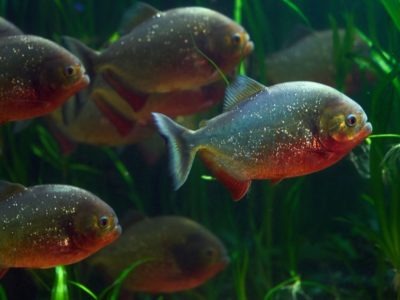 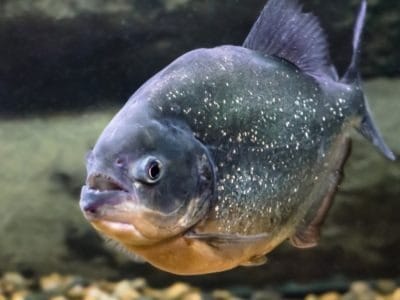 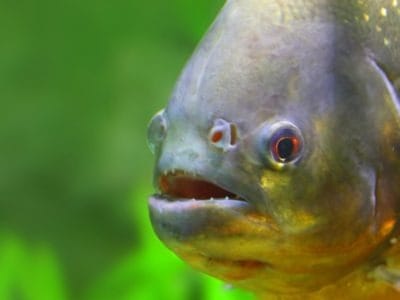 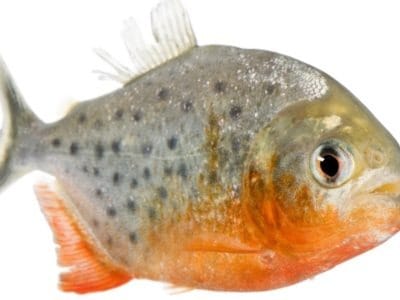 View all of the Piranha images!

Piranha is the common name used to refer to any of potentially over 60 species of freshwater fish with razor-sharp teeth.

Piranhas have a nasty reputation for being fierce creatures that engage in deadly feeding frenzies. However, they actually eat a wide variety of food, including plants and carrion. Piranhas are fairly small, usually under two feet, and typically travel in groups called shoals.

Piranha is the common name for various species of fish within the family Serrasalmidae or the subfamily Serrasalminae that are also in the tetra family Characidae of the Characiformes order. Piranha species are found in several genera, including:

The exact number of species is unknown, but there are thought to be 30 to 60 or more. The most infamous species is the red-bellied piranha, which lives in South America and is primarily found in the Amazon River along with several other piranha species.

Some notable species facts include:

These fish’s coloring varies by species. For example, the red-bellied piranha is grayish with white speckles and a red belly. The black piranha is a uniform color of gray to nearly black with distinctive red eyes. Piranha species have a characteristic rhombus shape. They are typically between six and 13 inches long, but some species can be up to two feet in length. The weight of the fish doesn’t usually exceed 6.6 pounds. They have a recognizable jaw shape with large jaw muscles that are connected to the jaw tip, which makes it protrude slightly. The teeth of this fish are razor sharp and serrated, which makes them very adept at quickly tearing flesh.

These are freshwater fish and are indigenous to the Amazon basin. Some species have been discovered in Bangladesh, China, and even the United States, but these are generally escapees from exotic fish traders. Many species are found only in a single river system while others, like the red-bellied piranha, are found in several river systems in South America. Some species like murky, slow-moving water and are often found in very shallow water. However, other species like deep river channels and turbid water.

These fish are widespread and not threatened. Small fish are mainly active during the day. Larger and medium-sized fish are active during several periods, including dawn, late afternoon, and night.

There is only a minor commercial fishery of these fish as well as sport fishing. Some species are used as aquarium fish but are illegal in many areas as pets. They are considered a nuisance by fishers as they often steal bait, take fish off the line, and damage fishing gear.

Most species are opportunistic predators. They will eat nearly anything from plant life to other fish, insects, carrion, worms, and so on. Some species are adept at scale-eating and feed primarily by nipping off the scales or fins of other fish. This is more common with juvenile fish and smaller species. Piranhas also scavenge quite often.

These fish are regularly eaten by just about anything larger than it, including turtles, crocodiles, other fish, dolphins, and many species of water birds. They are also hunted by humans and used as food fish, or their teeth are used for carving by various South American tribes.

What do piranhas eat?

These fish are omnivorous and eat a wide variety of food, including fruit, seeds, insects, and other fish. They may prey on large animals that come into their habitat by attacking as a group. A large enough group can quickly kill a fairly big animal. However, they do not normally travel in hunting groups, and they usually attack weak or injured animals.

The breeding habits of most species are relatively unknown. Most known breeding behavior has been observed in aquariums. These fish can usually breed by the time they are a year old. Females lay thousands of eggs near thick vegetation, to which the eggs stick. Males fertilize the eggs, and then the eggs hatch after two or three days. Young fish will hide in vegetation until they’re big enough to defend themselves. The parents will often defend their nesting sites by swimming around them. These fish may live up to ten years in captivity, but it’s unknown how long they live in the wild.

Piranha in fishing and cooking

These fish have a minor commercial fishing interest and some recreational fishing interest as well. Catching them is fairly straightforward, but the main key is to have a wire-wrapped line above the hook. Fishers usually use bits of meat and actively thrash or plop the line to attract piranhas. The piranha will often quickly swipe the bait before it’s able to be pulled up. Handling the fish must be done very carefully as they will bite. They also have sharp ridges on their undersides that can cut skin and inject bacteria.

These fish can be eaten and are usually grilled whole. They are mainly eaten in their native South America. The taste is described as very salty, fishy, and a bit ripe.

There is no global data on how many of these fish are left in the world. They are not listed as threatened or endangered by IUCN, CITES, or USFWS. New species are still being discovered.

Are Piranhas herbivores, carnivores, or omnivores?

Piranhas are Omnivores, meaning they eat both plants and other animals.

What Kingdom do Piranhas belong to?

Piranhas belong to the Kingdom Animalia.

What class do Piranhas belong to?

Piranhas belong to the class Actinopterygii.

What phylum to Piranhas belong to?

Piranhas belong to the phylum Chordata.

What family do Piranhas belong to?

Piranhas belong to the family Characidae.

What order do Piranhas belong to?

Piranhas belong to the order Characiformes.

What type of covering do Piranhas have?

Piranhas are covered in scales.

What genus do Piranhas belong to?

Piranhas belong to the genus Piranha.

In what type of habitat do Piranhas live?

Piranhas live in fast-flowing rivers and the Amazon basin.

What is the main prey for Piranhas?

What are some predators of Piranhas?

Predators of Piranhas include botos, crocodiles, and turtles.

What are some distinguishing features of Piranhas?

Piranhas have rounded heads and a single row and triangular teeth.

How many eggs do Piranhas lay?

What is an interesting fact about Piranhas?

What is the lifespan of a Piranha?

What is the optimal pH for a Piranha?

What is a piranha?

A piranha is a small to medium bony, freshwater fish that lives in South America.

What do piranhas eat?

Piranhas are omnivorous and opportunistic and will eat nearly anything plant or animal.

Other fish, birds, reptiles, and humans will eat piranhas.

Can a piranha eat a human?

Despite their dangerous reputation, piranha attacks are rarely deadly. Piranhas travel in protective groups called shoals, but they rarely hunt in them. Feeding frenzies usually only happen when food is scarce. Piranhas may consume human corpses that end up in their habitat as they are notorious scavengers.

Where do piranhas live?

Piranhas are widespread throughout South America and live in many types of freshwater habitats, including lakes, rivers, creeks, and stagnant pools.

Where are piranhas Found?

Piranhas are primarily found in freshwater areas of South America.

How do Piranhas have babies?