Omnivores that eat anything!

Click through all of our Rat images in the gallery. 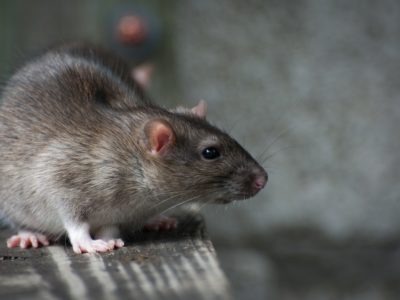 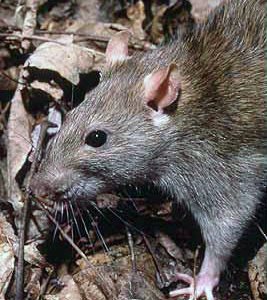 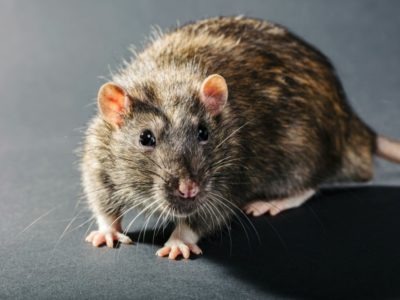 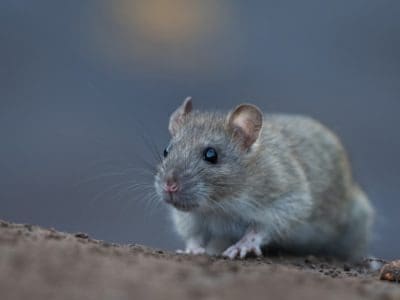 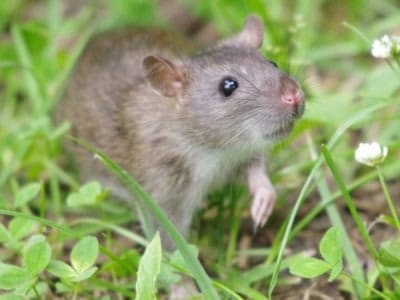 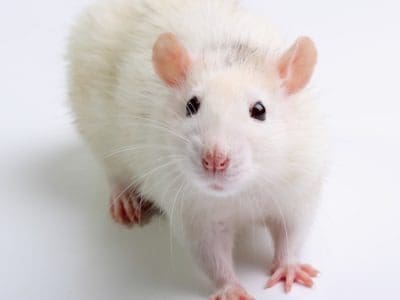 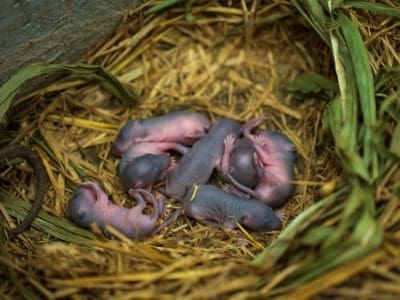 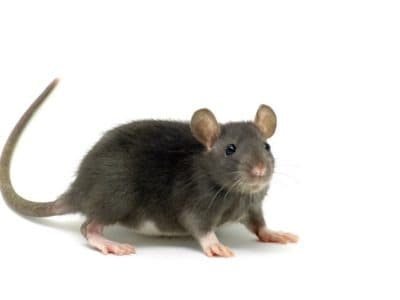 View all of the Rat images!

Rats live in places all over the world. They are nocturnal and live in packs. These medium-sized rodents are omnivores eating insects, seeds, fruits, eggs, and small animals. A female can have a litter of 8 to 12 babies. The lifespan of a rat is 2 to 3 years.

This animal belongs to the Muridae family and the classification Mammalia.

These animals can have black, brown, gray, or white fur. They have two big ears, dark eyes, and long whiskers. They have a mouthful of sharp teeth including 4 incisors. Their teeth continue to grow throughout its life. So, they have to chew on food and other items to wear down the edges.

One of their most notable features is a long, hairless tail. Generally, the animal’s tail is as long or longer than its body. The length of the tail is around 7 inches.

The animal uses its tail for more than one purpose. For one, it helps it to regulate its temperature. Its tail is hairless so it’s able to release heat to keep a rat’s body cool. Alternatively, when the animal is cold, it can curl its tail around itself to stay warm. Secondly, a rat’s tail helps it to maintain its balance. They climb up walls, trees and walk along narrow ledges. Their tail helps them to keep their weight balanced so they don’t fall.

These rodents weigh from 3 to 10 ounces and are 6 to 8 inches long. A rat weighing 10 ounces is a little heavier than a can of soup in your kitchen cabinet. In addition, a rat that’s 8 inches long is half as tall as a bowling pin.

The largest rat in the world is the Northern Luzon Giant cloud rat. Its scientific name is Phloeomys pallidus. This rodent grows to 2 and a half feet long and weighs close to 6 pounds. Now that’s a big rat!

These animals can fit into very small places. Some scientists believe that if the animal can fit its head into a hole, it can get the rest of its body through. This is one of its defenses against predators. They also have very sharp teeth that they use to defend themselves against attack.

In addition, their black, brown, or gray fur helps them to blend in with the dark underground environment.

These rodents are social creatures with each other. In fact, if the animal is left alone for any span of time it can become listless and depressed. Wild rats are shy and try to avoid being seen by humans or other animals. Pet rats can be very friendly and playful critters if raised around people.

A group of them is called a mischief and can contain a dozen or more members.

Rat vs Mouse: What is the Difference?

Rats and mice both fall under the mammal classification. But there are several differences between these two rodents.

One of the main differences between them is size. Mice are smaller than rats. A mouse weighs about one ounce to one and a half ounces.

Another difference is a mouse has hair on its tail while a rat’s tail is hairless.

The lifespan of a house mouse is less than a year whereas a rat can live up to 3 years.

These rodents live throughout the world. They live in India, Asia, North America, South America, Europe, and Australia. Humans have even introduced some rats to the continent of Antarctica. These animals live in warm to temperate climates. Think of it this way. Wherever humans live there are sure to be some rats nearby.

These animals are adaptable to a variety of habitats. Some live in trees while others live in attics and basements of homes. They live in drain pipes, in city sewers, and near rivers. Many of them live underground most of the time and come out of their hiding place to look for food. A rat uses its whiskers to safely navigate its way through dark tunnels and narrow spaces. Their whiskers are doubly important because these rodents are active during the night.

These rodents need to live in warm areas. So, when the cold weather arrives, they leave fields and wooded areas moving into homes, buildings, sheds, and other structures.

What do these rodents eat? They are omnivores so they eat both plants and animals. They eat fruit, nuts, seeds, insects, small animals, and eggs. The specific diet of these animals depends a lot on the food available in their habitat. A rodent that lives in the woods may eat mostly seeds, nuts, and fruits. Alternatively, a rat that lives in a city sewer is likely to eat meat, bread, and other items it finds in trash cans or on the street. A rodent that lives on the shore near a river is likely to eat bird eggs, baby turtles, fish, and other small animals.

The rodents that eat from garbage cans are at risk of ingesting items that make them sick. Expired or rotting food are two examples of items that would make a rat sick. However, they have an excellent sense of smell so it’s good at avoiding spoiled food. But don’t put it past them to eat too many potato chips!

Hawks, owls, and falcons are all predators of these animals. Domestic dogs and cats can also be threats to these rodents.

The conservation status of the black rat is Least Concern.

Black rats that build nests in the attics or basements of homes are at risk of being killed by an exterminator. But despite being thought of as a pest, the overall population of these animals remains stable.

As a note, the Northeaster Xanthurus species has a conservation status of Near Threatened with a decreasing population. These rodents live in Indonesia and are threatened by loss of habitat due to logging activity and farming.

These animals have a reputation for spreading disease to humans and other animals. It’s true that they can spread disease if they bite a human or another animal. Also, disease can be spread when a human touches a dead rat or comes in contact with their feces. Plus, fleas and ticks on these animals can contract a disease from them and spread it to animals and humans.

Some of the disease these animals carry include:

As a note, the plague and this rodent are connected in history. The Bubonic plague spread in the Middle Ages killing millions of people in Europe. Fortunately, things have changed since then. This disease can be treated with modern antibiotics.

A female makes a nest out of whatever material she can find. Leaves, shredded paper, insulation, cardboard, and grass are just some of the materials. She can make her nest almost anywhere. One animal may build a nest in a burrow in the woods while another chooses one corner of an attic.

A female can have as many as 5 litters of babies per year. Her gestation period runs from 21 to 29 days. She can have 8 to 12 babies in one litter. The babies, or pups, are born without any hair and their eyes closed. They have tiny pink bodies that weigh less than an ounce. These animals have the mammal classification, so females nurse their young. The male doesn’t provide any care for the pups.

A pup’s eyes open when they are 15 days old. They begin to eat solid food and grow their fur coat at 3 weeks old. Pups are independent by the time they are 4 weeks old.

As with most rodents, these animals are vulnerable to respiratory infection and disease. One respiratory ailment of them is caused by bacteria called mycoplasma.

Also, rodents that don’t chew enough food and other materials can suffer from overgrown teeth. Having teeth that are overgrown can interfere with a rat’s ability to get enough nourishment.

They can also develop tumors on their body.

These rodents are sexually mature at 3 to 5 months old. They have a lifespan of 2 to 3 years.

According to the IUCN Red List of Threatened Species, the black rat has a widespread and abundant population. Its numbers are holding steady.

The black rat lives throughout the southeastern United States down into Mexico. This animal is also found in Massachusetts up into British Columbia.

Rats in the Zoo

Are rats carnivores, herbivores, or omnivores?

Rats are omnivores. They eat whatever is most plentiful in their habitat. For example, a rat that lives in a wooded area may eat more plants than animals. Leaves, fruits, nuts, and insects may be the diet of a rat living in the woods.

Alternatively, a rat living in an urban environment may eat food scraps and other items it finds in trash cans as opposed to plants and vegetation.

Is a rat a mammal?

Yes, a rat is a mammal. Rats give birth to live young and pups are nursed by the mother rat.

What is the scientific name for a rat?

What is the difference between a rat and a mouse?

Remember that rats are big compared to mice. In fact, a house mouse might consider a black rat to be a giant! Also, rats have hairless tails whereas mice have hair on their tails. Rats usually live longer than mice.

What purposes does a rat serve?

Rats certainly serve a purpose in our ecosystem. For one, rats help to keep the insect population down by eating crickets, beetles and more. Also, rats are food for larger animals including owls, hawks, and falcon.

Rats, like most animals, play an important part in the ecosystem. Without them, our ecosystem would be unbalanced.

No. Wild rats are shy and like to stay out of sight. However, like other animals, they can cause injury if they feel threatened. They can bite and cause injury to a person’s hand or fingers. And, of course, there’s the possibility that a rat is carrying a disease.

For the most part, rats keep to themselves and lead their lives out of sight of humans.

What Kingdom do Rats belong to?

Rats belong to the Kingdom Animalia.

What class do Rats belong to?

Rats belong to the class Mammalia.

What phylum to Rats belong to?

Rats belong to the phylum Chordata.

What family do Rats belong to?

Rats belong to the family Muridae.

What order do Rats belong to?

Rats belong to the order Rodentia.

What type of covering do Rats have?

Rats are covered in Fur.

What genus do Rats belong to?

Rats belong to the genus Rattus.

In what type of habitat do Rats live?

What is the main prey for Rats?

What are some predators of Rats?

Predators of Rats include owls, snakes, raccoons, and cats.

How many babies do Rats have?

The average number of babies a Rat has is 8.

What is an interesting fact about Rats?

Rats are omnivores that eat anything!

What is the lifespan of a Rat?

How fast is a Rat?

A Rat can travel at speeds of up to 8 miles per hour.