Click through all of our Sand Lizard images in the gallery. 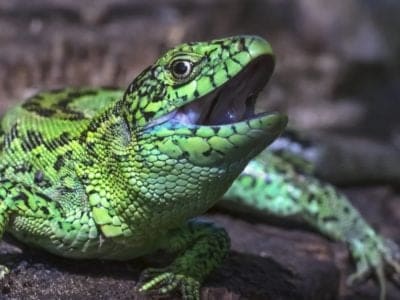 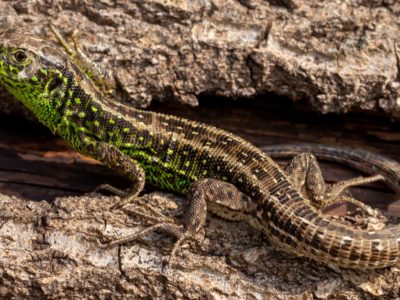 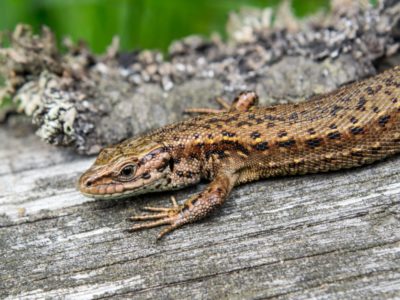 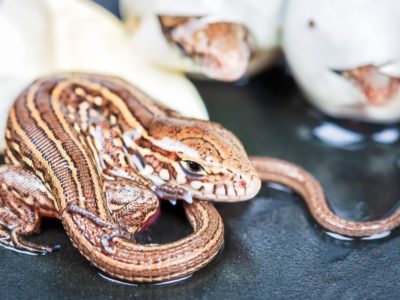 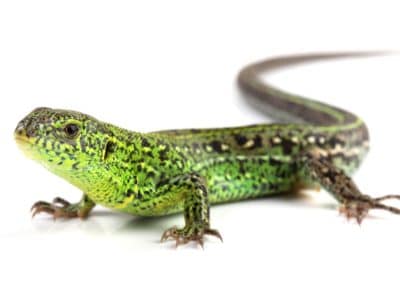 View all of the Sand Lizard images!

The sand lizard is one of the rarest reptiles in Europe, but wildlife officials are working to establish new populations.

If you are hiking in sandy areas along the Jurassic Coastline, watch for a sandy-brown lizard with dark splotches that is about 20 centimeters long to run across your path as it may be fa a male sand lizard. Alternatively, if you see a sandy-brown lizard with green flanks, you may be seeing a male sand lizard. Their sides become a brighter green during the breeding season, which occurs from April to May because it makes it easier for females to see them. These lizards weigh about 15 grams. Loss of habitat has made spotting one rare, but wildlife officials are starting new populations in many areas of Europe.

The scientific name for sand lizards is Lacerta agilis. The word “lacerta” derives from the Latin language, and it means lizard while “agilis” is a Latin word meaning mobile, swift or agile. Sand lizards are the only member of this family. It is sometimes called viviparous lizard.

There are at least three sub-species of sand lizards that live in different regions of England. It is hard without scientific testing to determine the difference between those living in the Surrey area, like East Hampshire and West Sussex heathlands, and along the Kentish coast, from those living in the Dorset region around East Hampshire and the West Sussex heathlands. The dorsal stripe on these subspecies may be broken or missing.

The third subspecies lives in the coastal dunes of West Lancashire, Wales, and along the Kentish coast. These lizards are smaller and slimmer. The males are a lighter green than those living in the Surrey or Dorset regions. Unlike those in the Dorset or Surrey area, males may stay green throughout the year. Generally, the dorsolateral stripes on this sub-species are broader and more prominent.

The sand lizard is usually sandy brown. They have dark splotches on their sides that some people believe look like eyes as these markings are typically lighter in the middle and darker around their outsides. These spots often vary in size.

Compared to the European green lizard or the Western green lacerta, sand lizards have a very stocky body. They have incredibly long tails that are often at least 1.5 times as long as their bodies. Like other lizards, this species can lose its tail if it gets trapped somehow.

Males tend to be stockier than females. Males have larger heads with more prominent jaws. The female’s eyes sit about 50% back on the head while the male’s eyes are about 33% back.

Most males have green flanks that turn brighter green during mating season. Scientists believe that this is so that females can see them easier and will find them more attractive. The markings along the flanks are more closely crowded together on the male than on the female.

These lizards lead a solitary life, but you may see two sunning together on a large rock. Often, they are about the same size. During mating season, males become very aggressive. They will fight each other to death.

Sand lizards move around during the day. You will often see pairs of sand lizards basking on top of a sand pile together. They must count on the sun to warm their bodies because they do not generate body heat.

Sand lizards live in burrows underground. They will not come out until they sense that the day is warming up. They stay in their burrows throughout the winter months. When it is time to come out in the spring, males usually leave their burrows before females.

Once they emerge from their burrows in the morning, sand lizards bask in the sun. Scientists believe that they need sunlight to warm their bodies before they have the energy to hunt.

While this lizard typically lives in dry heathlands, it is very adaptable. The Surrey subspecies must have a gravel or sandy substrate to thrive. The Dorset subspecies also live in cliff-top meadows.

While adaptable throughout much of their lives, they prefer to live in a sloped area. They also need a place that is soft enough that they can create their burrows. Generally, they prefer a mossy area that is at least 30 centimeters deep. They will build their nests and lay their eggs in this area.

These lizards often hunt for their food in grassy areas. Then, return to sandy areas when the sunsets.

Sand lizards are carnivores. They prefer to dine daily on grasshoppers, spiders, and insects, but they can survive for long periods if food is not available. Male sand lizards have eaten their hatchlings and the hatchlings of the common lizard if they get hungry.

The main predators of sand lizards are birds of prey, especially kestrels. Another predator is the smooth snake.

While this lizard has a hard time escaping from these predators, other predators, like foxes, badgers, weasels, and crows, will try to eat them.

This lizard uses several techniques to escape its predators. First, it will stay perfectly still in hopes that the predator does not notice it. If that does not work, then it will try to escape to its burrow. In cases where those two techniques do not work, then it will release its tail. The tail will wiggle on the ground for several minutes, which is usually enough to capture the predator’s attention giving the lizard time to escape. The bite is not poisonous.

Humans are another massive threat to these lizards because of deforestation and the breaking of forests into multiple smaller sections through logging or for housing development. While the International Union for Conservation of Nature considers the species to be of least concern, the Wildlife and Countryside Act of 1981 and the United Kingdom Post-2010 Biodiversity Framework list it as a priority species.

When people build too close to the sand lizard’s habitat, domestic cats and dogs can also be a problem for this reptile.

Scientists believe that the female sand lizard chooses her mates. They seem to prefer those that are distantly related. Each female typically mates with several males during March and April, but she will only lay eggs one time each year. If the female is successful in choosing a mate that is more distantly related, then she will usually lay more eggs.

The sand lizard is the only native reptile in the United Kingdom to lay eggs. The eggs will stay in the nest for three-to-four months before they hatch in August or September.

Most nests are near the bare ground on a south-facing slope. Some nests are in sandy areas near marram grass because the female can find warmth and food in the grass.

Baby sand lizards, called hatchlings, must fend for themselves when they are born as the mother does not return to the nest after laying her eggs. Hatchlings reach sexual maturity in about two years.

In their natural habitat, the lifespan most is about 12 years old. Some have a lifespan of about 20 years in captivity.

No one knows for sure exactly how many sand lizards there are in the world. Scientists believe that the number is severely declining. They feel that there are no remaining sand lizards in North and West Wales, Cheshire, Kent, Sussex, Berkshire, Hampshire, Devon, and Cornwall. They also believe that the population has decreased by over 90% in Merseyside, Surrey, and Dorset.

Sand Lizards are Carnivores, meaning they eat other animals.

What Kingdom do Sand Lizards belong to?

What phylum to Sand Lizards belong to?

What family do Sand Lizards belong to?

What order do Sand Lizards belong to?

What genus do Sand Lizards belong to?

What type of covering do Sand Lizards have?

Sand Lizards are covered in scales.

In what type of habitat do Sand Lizards live?

What is the main prey for Sand Lizards?

What are some distinguishing features of Sand Lizards?

How many eggs do Sand Lizards lay?

What is an interesting fact about Sand Lizards?

What is the scientific name for the Sand Lizard?

The scientific name for the Sand Lizard is Lacerta agilis.

What is the lifespan of a Sand Lizard?

Sand Lizards can live for 5 to 8 years.

How fast is a Sand Lizard?

A Sand Lizard can travel at speeds of up to 30 miles per hour.

Where are sand lizards found in the UK?

Sand lizards live across much of the United Kingdom. The largest groups are in Surrey and Dorsett. They also live in other regions, including Russia, Mongolia, and China. None of the groups are poisonous.

The sand lizard can bite when it feels threatened. They will sometimes bite animals and release their tails at the same time when they feel threatened. If you happen to get bitten, rest assured that the bite is not poisonous.

How big is a sand lizard?

Mature sand lizards are about 20 centimeters long. Of course, their size gets bigger as they move from hatchlings to maturity. They weigh about 15 grams. Males tend to be heavier than females.

Why is the sand lizard endangered?

The ICUN does not consider this lizard endangered, but many European laws protect it. Loss of habitat is the main reason its numbers are declining. Developers are building homes where they formerly lived.

What do sand lizards eat?

These lizards are carnivorous. They prefer to eat insects and spiders. If they get hungry enough, they will eat some flowers and their own young.

How do you take care of a sand lizard?

You can keep two male and two female sand lizards in a terrarium measuring about 13 feet by 9 feet. You should provide rocks or another surface for them to bask on. Feed them a diet of insects daily and give them a shower or drink of water each day.

What do baby sand lizards eat?

Hatchlings eat the same diet as adult sand lizards. They eat spiders, insects, and grasshoppers. They do this naturally because they never see their mother or father after they are born. ”

How do Sand Lizards have babies?