Sawfish teeth keep growing as the fish gets older

Click through all of our Sawfish images in the gallery. 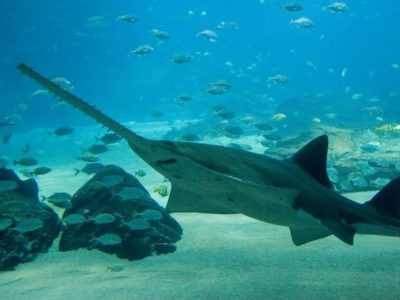 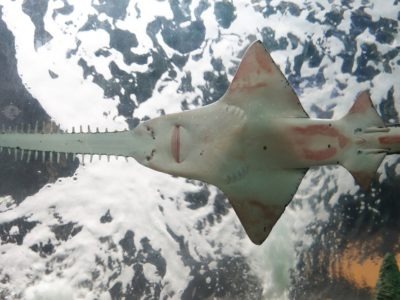 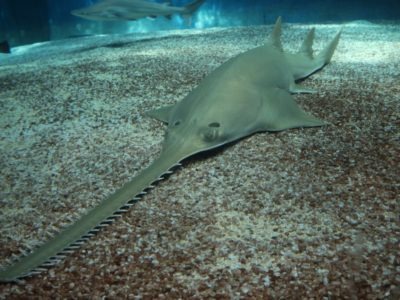 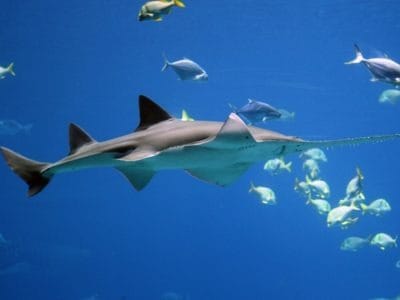 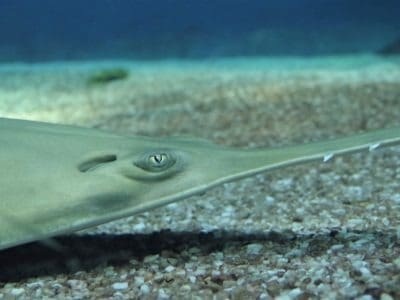 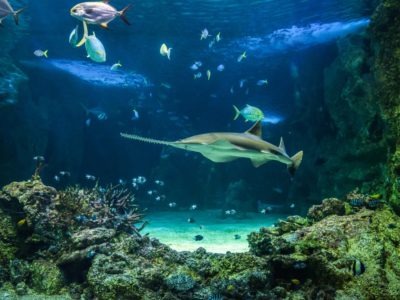 View all of the Sawfish images!

The sawfish, also known as the carpenter shark, is a tropical ray fish that swims along the shallow coasts of warm marine areas.

Fully-grown sawfish are titanic in size and can weigh well over 1,000 pounds. The sawfish’s distinctive spiked snout has been the source of many myths and false facts, leading to a lot of confusion about this fish’s true nature. However, recent research has shown that these creatures are shy, gentle, and an important part of their local ecosystems.

The scientific name for a single sawfish is pristis. This name is derived from the Greek word pristes, which just means “saw”. These fish get their name from their distinctive snout, which is covered in sharp ridges. In some areas, they are also known as carpenter sharks – a name that references the false myth that sawfish can actually saw objects in half. There are five different kinds of sawfish, all of which can be grouped into the family Pristidae.

These fish belong to the order Rhinopristoformes, along with guitarfish and banjo rays. Sawfish should not be confused with sawsharks, which actually belong to the family Pristiophoridae.

There are currently five recognized species, all of which are either endangered or critically endangered.

Sawfish are large marine creatures with rough, sandpaper-like skin that is typically brown or grey in color. These fish have four pectoral and pelvic fins extending from their sides; they also have two dorsal fins and a single tail fin. The size and shape of these fins help distinguish the different species from one another.

These fish have two eyes on the top of their relatively flat heads. Like other rays, their mouths, nostrils, and gills are all located on the bottom of their bodies. The bottom of the fish is completely flat, allowing them to glide freely along the coastal floor.

These fish are some of the biggest marine animals. The largest recorded one was 24 feet long, and it’s theorized that there may be even larger ones that have successfully evaded fishermen. Most of them weigh around 700 pounds, but some truly titanic specimens may weigh as much as 1,300 pounds.

Sawfish can be immediately recognized by their rostrums, which are thin, elongated snouts that can extend to one third the length of the fish’s body. A sawfish’s rostrum is covered in peg-like spikes or “teeth,” creating the characteristic saw-like appearance.

The number of teeth on the fish’s rostrum varies based on the species and the individual fish. Rostral teeth grow in as the fish matures, which means that an older sawfish will have much larger teeth. Females may have two to six fewer teeth than males of the same species.

A sawfish’s snout is actually incredibly sensitive. The rostrums are covered in sensory organs that allow them to detect the movement of other fish in the water through electroreception. Some of them may also use their rostrums to pin prey against the ocean floor.

These fish inhabit warm coastal areas in both the Atlantic and Pacific oceans. Both largetooth and smalltooth sawfish can be found along the Gulf Coast; most sightings are in Florida, but a few historic sightings suggest that these fish once ranged as far as the state of New York. You can also find them in the Mediterranean Sea, the Indian Ocean, the Persian Gulf, and along the coast of Australia.

These fish prefer to live in shallow marine waters and seldom go beneath a depth of 130 meters. They are also capable of surviving in freshwater, and several have been spotted swimming up rivers and even making their homes in high-saline lakes. Although these fish typically prefer warmer waters, smalltooth and green sawfish can survive in slightly colder regions. All of them are bottom-dwellers that like to live in areas with high amounts of soft mud or sand.

All species of these fish are either endangered or critically endangered. No exact population counts are available; however, it’s estimated that there could be as many as 2,000 or as few as 200 of any given sawfish species.

These fish are carnivores that will eat any fish or crustacean that they can catch. Most of them feed on mollusks, crabs, and other small fish that swim along the coastal floor. They do not typically attack creatures that are too large to eat, which means that they are not a threat to humans.

These fish have very few natural predators. They are at most risk from sharks, crocodiles, and dolphins. In order to defend themselves, they will often thrash their rostrums back and forth in hopes of cutting the predator or scaring it away.

These fish reproduce by mating and give birth to a litter of pups after a several-month long gestation period. A litter can have anywhere from 7 to 14 pups. Depending on the species, these fish reach maturity at around 7 – 12 years old. Most of them can live to be as old as 30 years in the wild.

One of the most recently discovered facts is that female smalltooth sawfish can reproduce via parthenogenesis. The resulting pups will be clones of the mother. This breeding method is theorized to be a response to low populations and the inability to find a normal mate.

Sawfish in Fishing and Cooking

These fish are critically endangered and are illegal to fish in nearly all parts of the world. Unfortunately, these fish are often poached for their unique rostrums. In Florida, being caught with a rostrum can result in a fine of $10,000.

In some parts of the world, sawfish fins may be used to make shark fin soup. However, these fish have little nutritional value, which means that they are seldom hunted unless they are mistaken for another type of fish.

Where are sawfish found?

Sawfish are found in warm coastal waters around the world. Largetooth sawfish are typically found in Florida, while other types of sawfish can be found near Africa, Australia, and India.

What do sawfish eat?

Sawfish are carnivores that eat small fish, crustaceans, and mollusks.

Where do sawfish live?

Sawfish used to inhabit nearly every coastal region. However, due to declining numbers, sawfish populations have retreated to tropical areas like the coasts of Florida and Australia.

Is a sawfish dangerous?

Sawfish only eat small fish and will not attack humans unless they are threatened. However, sawfish rostrums are incredibly sharp, so it is not wise to approach one of these creatures.

Why is sawfish endangered?

Sawfish used to be poached heavily for their distinctive rostrums. A combination of over-hunting and changing ecosystems has resulted in critical endangerment for every type of sawfish.

What is the difference between sawfish and sawshark?

Sawfish are a type of ray, which means they have mouths and gills on the bottom of their bodies. Sawsharks are actual sharks and have gills on their necks; they also have sharp barbs on their rostrums.

What Kingdom do Sawfish belong to?

Sawfish belong to the Kingdom Animalia.

How do Sawfish have babies?