Click through all of our Sea Urchin images in the gallery. 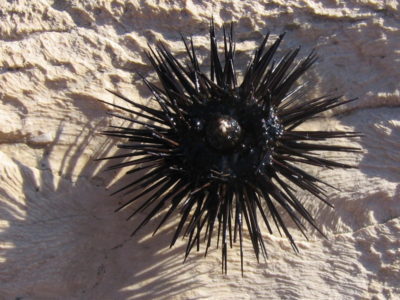 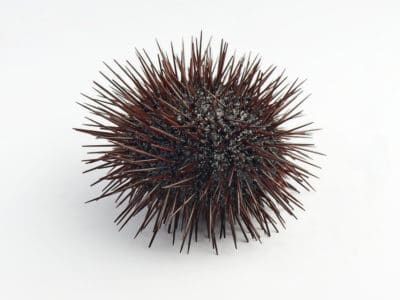 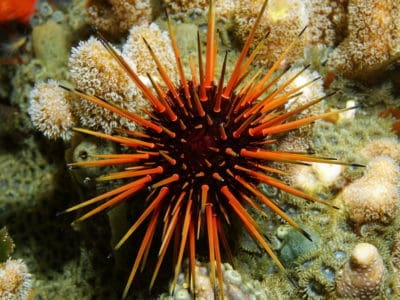 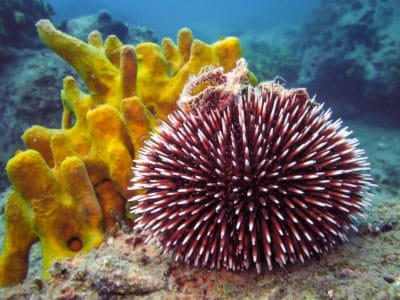 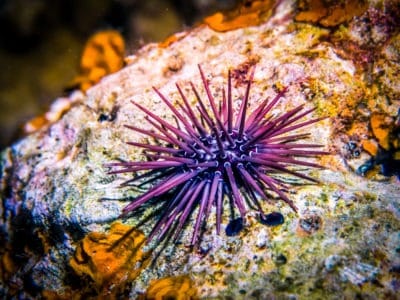 View all of the Sea Urchin images!

Sea urchins are animals that are typically small, spiny and round. They live in all the earth’s oceans, at depths ranging from the tide line to 15,000 feet. Because they cannot swim, they live on the sea floor. Their main defense against more agile predators like eels and otters is their hard, spiny test, or shell.

Sea urchins are in the Echinodermata phylum. The scientific name is Echinoidia, which is also the name of their class. They are in the Camarodonta order and some belong to the Echinidae family. This family contains genera including Strongylocentrotus and Lytechinus.

Some of the more interesting types of the 950 species include:

Sea urchins are small sea animals that have spherical tests, or shells, that are typically covered in spines similar to those of a porcupine. Very small tube-shaped feet among the spines help them move slowly along the ocean floor. They come in just about every color, from black to white, red, orange, green, brown, purple, pink, yellow, blue and gray. They range in size from about an inch in diameter up to 14 inches. On average, they weigh about one pound.

Because there are nearly one thousand types of sea urchins, these animals can vary significantly in appearance. You can easily identify most of them by their spiny exteriors, but some, like sand dollars, have only short hairs all over their bodies. Others, like pencil sea urchins, have rounded-off spines that are not sharp like typical urchin spines.

Sea urchins live in oceans throughout the world. Arctic or tropic, shoreline or deepest sea trenches, you can find them there. Because they cannot swim, the ocean floor is their home. Some, like the shingle urchin, live in the shallows near beaches where the sun shines. Others, like the ones in the Pourtaleslidae family, live so deep below the surface they are in total darkness.

Barren underwater areas have dense populations of these creatures, and populations nearer to the shore are the densest by far. While they live throughout the world, the greatest numbers live in temperate and tropical ocean habitats in the shallows up to ten meters down where the plants they eat are plentiful.

With so many types and such a wide-ranging habitat, it is impossible to know for sure. However, a recent marine study in Oregon estimated that the purple species population on just one coastal reef numbered around 350 million, a figure that represented a 10,000-fold increase in just a few years, putting them in a least concern conservation category. Researchers attributed the exponential expansion of this Pacific coast class of urchins to a marine ecosystem that is out of balance.

Meanwhile, in the Mediterranean, the purple sea urchin population is currently in a near threatened state. Factors that have decimated the species include warming sea temperatures and invasive fish that eat algae, depriving the urchins of a diet staple. Again, the underlying cause is an imbalance in the ecosystem.

However, scarcity of food does not necessarily mean the species is headed for extinction. Purple urchins can go dormant and survive with no food for years at a time. With such extraordinary persistence, these populations may ebb but they also flow.

Despite their inborn resiliency, sea urchins are subject to threats from disease as well as predators. A 1981 bacterial disease nearly wiped out the Hemicentrotus pulcherimus and Pseudocentrotus depressus species in Japan. Bald sea urchin disease, another bacterial illness, threatens some sea urchin populations, causing the animals’ spines to fall out and leaving them defenseless against predators.

Shellfish like crabs and lobsters are among these creatures’ natural predators. Triggerfish and wrasse are two fish that prey on them. The wolf eel is specially equipped to hunt and eat those in the Northern Hemisphere. Sea otters in regions like British Columbia help maintain ecological balance by keeping urchins from overpopulating.

Although they are slow-moving, sea urchins do have some means of protecting themselves. Their sharp spines are often enough to discourage some predators. A few urchin species are venomous too.

What Do Sea Urchin Eat?

Sea urchin mainly eat marine vegetation like algae and kelp. The also prey on sessile, or immobile, sea creatures such as coral and sea sponges.

Females of the species produce eggs. Most release these eggs into the sea for fertilization by the sperm that males have released. The females of a few species hold their eggs among their spines rather than let them float freely.

Once fertilization occurs, it takes only about 12 hours for the egg to become an embryo. Soon thereafter, the embryo becomes a larva with cilia that can collect microscopic food to nurture its growth. It takes several months for the larva to transform into a fully developed sea urchin. It will grow for a few more years to reach adulthood. Depending on the species, they live a number of years. For example, the purple species has a life expectancy of around 20 years.

Sea Urchins in Fishing and Cooking

In many international cuisines, from Alaska to New Zealand, the gonads, or roe, are a delicacy. Typically, people eat them raw with lemon juice or olive oil. In other regions, chefs incorporate the roe in gourmet sauces, omelettes and soups.

The Japanese enjoy the roe in uni sushi. They consume about 50,000 tons of urchin roes per year, which amounts to approximately 80 percent of the world’s commercially processed supply.

What do sea urchins eat?

Mainly, they eat the plants around them, including kelp, algae and phytoplankton, which is made up of microscopic plant matter. Sea urchins also eat zooplankton, made of tiny animal life, and small, non-mobile animals like sea sponges and periwinkles that they can easily catch.

What is a sea urchin?

A sea urchin is a small marine animal in the Echinodermata phylum that is spherical in shape and covered in spines or cilia. There are 950 species of sea urchins. Some are irregular, meaning their appearance or anatomy varies from the majority of the species.

Where do sea urchins live?

Sea urchins live in oceans throughout the world. They live on ocean floors from zero depth to the deepest trenches.

A few of the 950 species of sea urchins are poisonous. Some carry poison in their spines while others have venom in their tubular feet. Urchins in tropical environments are more likely to be poisonous. When you step on a poisonous sea urchins and the venom enters a puncture in the skin, you feel an immediate burning sensation. This can last for many hours. Other symptoms that may develop from a sea urchin sting include nausea, vomiting, difficulty breathing and muscle weakness. However, even the venom of the most poisonous species, the flower sea urchin, is rarely fatal.

What Kingdom do Sea Urchins belong to?

What phylum do Sea Urchins belong to?

What class do Sea Urchins belong to?

What order do Sea Urchins belong to?

What type of covering do Sea Urchins have?

Sea Urchins are covered in Plates.

What are some predators of Sea Urchins?

What is the average clutch size of a Sea Urchin?

What is an interesting fact about Sea Urchins?

Sea Urchins can live for up to 200 years!

What is the scientific name for the Sea Urchin?

The scientific name for the Sea Urchin is Echinoidea.

What is the lifespan of a Sea Urchin?

What is the optimal pH for a Sea Urchin?

How do Sea Urchins have babies?