This snake uses its sharp tail to steady itself when capturing prey.

Click through all of our Sharp-Tailed Snake images in the gallery. 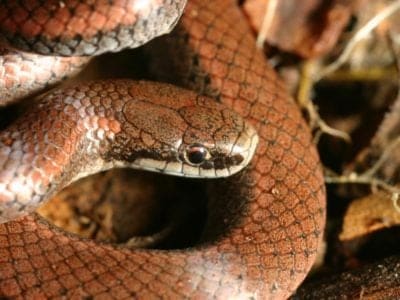 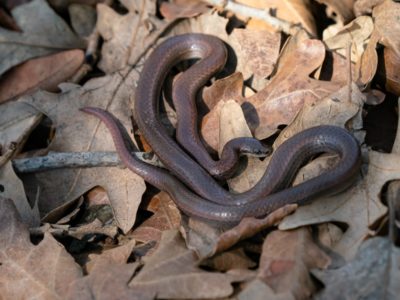 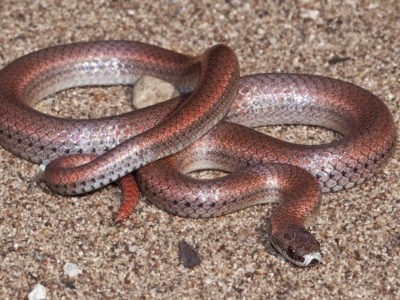 View all of the Sharp-Tailed Snake images!

Sharp-tailed snakes or Sharptail snakes are also called Pacific brown snakes or gentle brown snakes. Their range includes the western part of the United States and continues up into British Columbia in Canada. These snakes spend a lot of their time hiding in moist places beneath rocks. They are carnivores eating mostly a diet of slugs. Sharptail snakes are small in size and non-venomous which is why they are kept as a pet in some households.

It belongs to the Colubridae family and is in the Reptilia class.

The common Sharp-tailed snake has a mixture of gray and red scales on its back paired with white and black bands on its belly. Their eyes are dark and round. This reptile gets its name from the sharp, spiny end of its tail. Biologists believe the purpose of its tail is to hold a slippery slug in place while trying to eat it.

A Sharptail snake is small in size and about the same thickness as a pencil. Females are larger than males. This snake normally measures about 12 inches, but some grow longer. The longest this snake can measure is 19 inches. They weigh around five ounces. As a comparison, a 12-inch long Sharptail snake would be equal in length to four-fifths of a single bowling pin. A snake weighing five ounces is equal in weight to an average baseball.

It’s not uncommon for these snakes to be mistaken for garter snakes. Garters and Sharptail snakes are both small snakes, though garter snakes are longer. They are both non-venomous, have dark scales, and include slugs as part of their diet. One of the biggest differences between these two snakes is a garter snake doesn’t have a sharp tail and has a lifespan of up to just five years in the wild. Also, garter snakes give live birth to their young while Sharptail snakes lay eggs.

This snake is small in size and non-venomous, so it has very few ways to defend itself against predators. Their most powerful defense is their ability to hide under rocks and in tiny crevices where predators can’t reach them. If this snake is grabbed by a predator, it whips its spiny tail back and forth at the animal. Though this doesn’t cause injury, it can startle the predator allowing the snake a few extra seconds to slip away.

Baby Sharptail snakes or hatchlings coil up into a tight ball when confronted by a predator. Scientists believe they do this with the thought that they’re making themselves too large for a predator to swallow.

This snake is considered semi-social. Scientists have reported seeing several Sharptail snakes living together under the same rock. Plus, females sometimes lay their eggs in a communal nest where other snakes have laid their eggs. A group of snakes is sometimes called a pit or a den. These snakes also spend a lot of time hunting and moving through their territory alone.

Sharptail snakes are shy and non-aggressive. Oftentimes, they will try to slither for cover at any sign of a threat. A person who manages to catch one of these quick snakes is likely to see it roll into a ball in their hand as opposed to trying to bite.

The docile nature of this snake makes it seem like the perfect pet for many reptile enthusiasts. But these snakes need a specific type of care and environment including a regulated temperature to thrive. So, instead of keeping one as a pet, it’s better to appreciate them in the wild where they can care for themselves. Consider yourself lucky if you find one of these elusive snakes in the forest!

Sharptail snakes live in the western part of the United States and up into British Columbia. Specifically, these snakes are found in California, Washington State, Oregon as well as Canada, and Vancouver Island. Their habitat includes forests, woodlands, and grasslands. They live in a moist environment under rocks, in hollow trees, and in crevices. These snakes like cool conditions and stay under shady bushes during the day when it turns really hot in the summer. In fact, this is what makes the Sharptail snake different from many other types of reptiles. Most snakes are active in warm weather whereas Sharp-tailed snakes like to move around during cool weather.

In areas where it’s extremely cold in the winter, they go into a state of brumation from about November to February. A snake in brumation doesn’t sleep like a snake in hibernation. Instead, it still moves around and hunts, but at a slower rate to conserve energy and stay warm. In brumation, a snake sleeps a lot and has a very low metabolic rate.

Sharptail snakes move around within their territory. They are especially active during the rainy season moving to different areas while making burrows and searching for prey.

Sharptail snakes are carnivores. They hunt for food during the coolest hours of the day. Because of their small size, these snakes have a diet of small insects. They usually find their prey in the mud beneath the rocks and in the rock crevices where they spend a lot of their time.

What eats a Sharptail snake?

What does a Sharptail snake eat?

A Sharptail snake has a diet consisting mostly of slugs and the eggs of slugs. These small creatures live in the same habitat as this snake and are easy for it to find and capture. Sharptail snakes are known for their burrowing skills, so this is another way they find slugs and slug eggs to consume.

Habitat loss is a threat to some of these snakes. But they are spread out over such a large territory this threat is considered mild. There is some threat posed to this snake by people who capture them to sell for a high price in pet shops or online via reptile dealers. There are no laws in place to prevent the sale of these non-venomous snakes. They are sold for a high price because of their size and gentle nature.

Baby Sharptail snakes are called hatchlings or snakelets. They must learn to survive on their own, without receiving any care from their parents, immediately after hatching from their egg. Not surprisingly, the hatchlings of this small snake are very tiny. They’re sometimes mistaken for earthworms! It takes three years for a young snake to reach adult size.
The lifespan of a Sharptail snake can vary depending on the number and variety of predators in its habitat. But these snakes have a lifespan of up to 10 years.

Biologists estimate the population of this snake as more than 100,000. Though they face threats of habitat loss and capture for the pet market, they have a stable population in the United States. Their conservation status in the U.S. is Least Concern. But, in British Columbia, they are categorized as Endangered due to habitat loss there.

Sharptail snakes are carnivores eating mostly a diet of slugs. In fact, they have recurved teeth designed to grab and hold onto a slug’s slippery body. Their spiny tail keeps a slug still while the snake is eating it. They also eat slender salamanders on occasion.

No, these snakes are not dangerous. They are very small and, on top of that, they are non-venomous. If a person finds a Sharptail snake it may simply roll up into a ball as a way to protect itself. They don’t present any threat to humans. However, they have many animal predators to contend with in the wild.

What do Sharptail snakes eat?

Like any other type of snake, Sharptail snakes can bite. But their teeth are so small that it’s likely to cause just a mild pinching sensation. This is about the same sensation as a garter snake’s bite. Sharp-tailed snakes have what are called recurved teeth. Recurved teeth have a special design allowing these snakes to puncture and hang onto slippery insects.

Of course, this is different from being bitten by a larger snake like a cobra. A person pays a high price if they are bitten by a cobra because their bite is both painful and venomous!

You may wonder if a Sharp-tailed snake’s tail poses any threat to a human. If this snake’s sharp tail were to come into contact with a person’s skin it wouldn’t be likely to cause pain due to its small size. Their tails don’t sting and are not powerful enough to cut a human’s skin.