Click through all of our Snowshoe Hare images in the gallery. 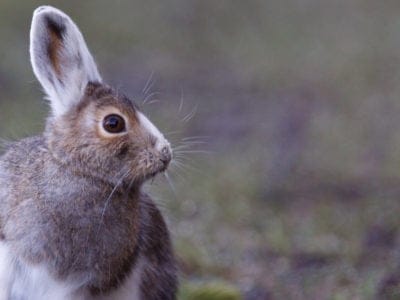 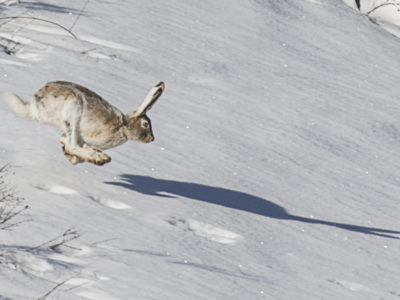 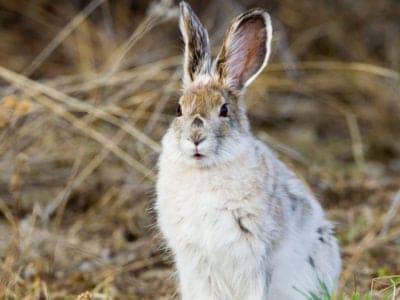 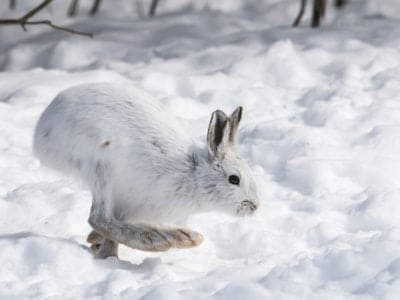 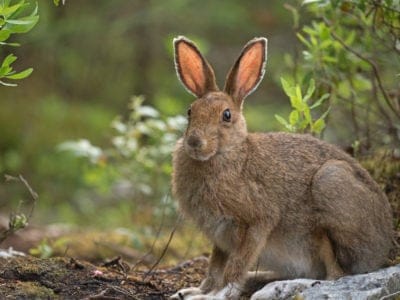 View all of the Snowshoe Hare images!

Snowshoe hares live in the northern United States as well as all over Canada. They are herbivores eating flowers, grass, leafy plants, and bark. While their coats are bright white in the wintertime, they turn brown in the spring. Snowshoe hares sleep on and off during the day and are active at dawn and dusk. They can live up to five years in the wild.

These animals have two long ears, a tail, and four feet with a thick layer of fur on them. They have a bright white coat in the winter that changes to brown or gray for the spring and summer. This change allows them to blend in with their snowy environment in the winter and disappear among the brush and trees throughout the other seasons. This camouflage is one of the ways they can stay clear of predators.

Adults can measure up to 20 inches in length and weigh up to 4 pounds. A 20-inch snowshoe hare is equal in length to one and one third the size of a bowling pin. A 4-pound snowshoe hare weighs about the same as a Chihuahua.

Compare the snowshoe hare with the Arctic hare. Both of these hares have a bright white coat, but Arctic hares weigh 6 to 15 pounds and grow to be 19 to 26 inches in size.

Another defensive feature (besides blending in with its environment) of a snowshoe hare is its speed. This hare can run at speeds up to 27mph. Also, this mammal can switch directions in a split second. So, this hare can not only outrun most predators, but it can also confuse them by taking a sudden turn and dashing off in another direction.

Young snowshoes or leverets are known to freeze when they see a predator. This may be because they don’t yet have the full speed and coordination of an adult hare. They freeze in the hope of blending in with their habitat until the predator passes by.

These hares are good swimmers. They may even swim across a stream or river in an effort to escape a predator. Who knew?!

Snowshoes are solitary animals though there are usually other hares living in an area nearby. They are shy animals preferring to hide in the brush. When out looking for food, these hares use their excellent hearing to continually monitor their environment for threats. If hares ever do form a group, it’s called a drove.

The Snowshoe Hare’s Back Feet

The back feet of these hares are especially large with a layer of stiff hair covering them. In fact, look at this hare’s feet and you may think it is wearing a pair of snowshoes! Their back feet can measure up to 6 inches long. The 6-inch foot of a snowshoe hare is about as long as a single dollar bill. Feet of this size help them to move on the surface of the snow. This makes their tracks easy to find! The thick, stiff fur on their feet helps to keep them warm in frigid temperatures.

These hares live in the northern region of the United States and all over Canada. They live in a temperate climate and are active throughout the year. They live in forests, open fields, riverside thickets and near fencerows. Forests in the Rocky Mountains and the Appalachian Mountains are home to many snowshoe hares.

They don’t dig burrows and tunnels like rabbits. Instead, they find shelter in lower areas above ground or beneath thickets.

A snowshoe moves around but stays within about a 20-acre range of space throughout the year. They eat the plant life that’s most plentiful at the time. Whether it’s winter or summer, scientists have observed snowshoe hare tracks on the same trails as these animals search for food.

Snowshoe hares are herbivores. The diet of this animal is diverse. In summer they eat herbaceous plants and the new growth of woody vegetation. In winter, they eat twigs, buds, and bark.

Snowshoe plants to eat in both early morning and at dusk. Some snowshoe hares search for food alone while others form small groups. These animals are fast, which is fortunate because they are a popular target for many predators.

When these hares are out in a field or the forest eating grass and plants, they are vulnerable to fast predators such as coyotes, lynx, foxes, wolves, and bobcats. Owls out hunting for prey can spot snowshoe hares feasting on plants in the evening and silently swoop down to capture one.

What do snowshoe hares eat?

Snowshoe hares have a diet of grass, plants and flowers in the spring and summer. When plants are harder to find in the cold weather months, these hares may eat tree bark, twigs, leaves and stems.

Snowshoe hares are known to eat their own solid waste. They do this because they aren’t able to get all of the nutrients out of the food they eat by digesting it just one time. They eat their waste to get any remaining nutrients from their food.

Snowshoe hares are vulnerable to habitat loss in some areas. Also, during certain seasons, some people participate in hunting for them to eat their meat. Despite these threats, the official conservation status of this hare is Least Concern with a stable population.

Breeding season for the snowshoe hare runs through spring and summer. Both male and female snowshoe hares have multiple partners throughout their lives. When trying to find a mate, male hares chase females around the area. Both males and females jump vertically in the air and stare each other down. Once a female is pregnant, the gestation period is around 37 days. She prepares a nest made of grass that is smashed flat on the ground. She chases the male away if he enters what’s known as the birthing area.

The female hare gives live birth to a litter of 1 to 8 babies. A baby hare is also called a leveret until the age of one year old. They weigh a little over one ounce at birth. A female snowshoe hare can have up to 4 litters of young in one year. She has sole care of the leverets from birth.

When snowshoe hares are born they have all of their fur, their eyes are open, and they’re able to move around. Baby snowshoe rabbits, or leverets, spend the daytime hidden in the weeds. They are born in the spring and summer, so they have a brown coat that helps to camouflage them. At dusk, they go to their mother to nurse for a very short length of time before hiding again. When the leverets are around 14 days old, they begin to eat small plants and are fully weaned at 28 days. They become independent at about 4 weeks of age.

Tularemia is a common disease of these hares. This disease can lead to anemia. It’s transmitted through ticks. The hare can live up to 5 years in the wild.

The IUCN Red List of Threatened Species doesn’t list a total population for snowshoe hares. But, the Minnesota Department of Natural Resources (MDNR) has some data regarding this hare’s population there.

Every ten years the population of this hare reaches its highest, then drops off. Scientists believe this decrease is due to disease that runs through the population. However, in plentiful years, the MDNR estimates there are approximately 3,400 snowshoe hares per square mile of the state! In short, after a decrease in the population, this species fully recovers due to the fact that a female hare can have up to 4 litters of young per year.

The official conservation status of the snowshoe hare is Least Concern with a stable population.

Where do snowshoe hares live?

Snowshoe hares live in the northern United States and throughout the country of Canada. Specifically, they live in forests, near fence rows, and in riverside thickets. Many of them live in mountain forests.

What does a snowshoe hare eat?

These hares have a diet of plants, grass, flowers, bark, and leaves.

How do snowshoe hares survive winter?

Snowshoe hares have large feet that allow them to hop on top of the snow. Also, they have a thick coat of fur that keeps them warm in frigid temperatures. When plants aren’t available to eat in the cold weather months, these hares have a diet of tree bark, twigs, and fallen leaves.

In the wintertime, this hare’s coat turns bright white allowing them to blend in with their snowy habitat. This protects many of them from natural predators as well as people out hunting.

What eats a snowshoe hare?

The predators of a snowshoe hare include coyotes, lynx, wolves, owls, bobcats, and foxes.

Are hares and rabbits the same?

One of the biggest differences between these two animals shows up at birth. Baby hares aka leverets are born with their eyes open and a full coat of fur. Alternatively, baby rabbits, called kits, are born blind with no fur. This makes rabbits much more vulnerable to predators from the very beginning.

Rabbits live in burrows with a series of tunnels. This habitat is sometimes called a warren. Alternatively, hares live in grassy areas above ground. This includes the nest a female hare makes when she is ready to give birth to her leverets.

In addition, scientists have observed that hares are less social than rabbits.

Why are they called snowshoe hares?

Snowshoe hares got their name due to the appearance of their large back feet. They leave tracks on the top of the snow because they’re able to walk on the surface. The design of their feet keeps them from sinking into the deep snow. If you ever see one of these hares hopping along it will look like it’s wearing snowshoes!